The treasure today is the 1880 United States Census record for my Hildreth great-grandparents and their family in Leominster, Worcester County, Massachusetts: 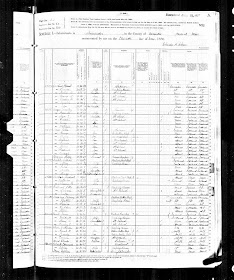 The entry for the Edward Hildreth family is below:

The extracted information for the family, residing in Leominster, taken on 11 June 1880, is:

The source citation for the census image is:

I consider the 1880 U.S. Census records to be an "Original Source" (because this "family snapshot" in June 1880 is in its first written form); mostly as "Secondary Information" (since we don't know who provided the information - although it was probably Sophia Hildreth), and as "Indirect Evidence" for most of the information (the exception being the birthplaces, and Edward's occupation which were certainly known by his wife if she was the informant).

I don't see any obvious errors in this census record (based on what I know about these persons from other records, including birth and marriage records), although Sophia (Buck) (Brigham) (Newton) Stone's birth year was 1797 and not 1796.

The birthplace for Sophia (Newton) Hildreth, and for her parents, are consistent with most of the other records I have from birth, marriage and death records.

This census entry was the first clue that I had that Sophia (Buck) (Brigham) Newton, mother of Sophia (Newton) Hildreth, had lived until at least 1880, and was a widow of a man named Stone.  I easily found the marriage of Sophia Newton to Jonathan Stone in 1862 in Westborough, Mass., and then Jonathan Stone's death in 1868 in Westborough, both in the Massachusetts Vital Records, 1841-1910 on the AmericanAncestors website.