Who Was the Last Revolutionary War Soldier to Die?

Maureen, of course, has written several books, including The Last Muster, which has photographs and stories of Revolutionary War soldiers and their families.  amazingly, some of these soldiers survived for over 80 years after the end of the war, and had their pictures, or portraits, taken and it is these photographs that Maureen has collected and printed in her book.  A second volume of The Last Muster will be published soon. 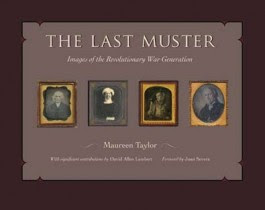 I did a search on Google using the search terms "last soldier" 'revolutionary war" and found several web sites that had pictures and descriptions of the "last soldier of the Revolutionary War, including:

Another man, George Fruits (supposedly 1762-1876) claimed to be the last surviving soldier, but he apparently was born in 1779, and his father's war service has been conflated with him.

2)  An article and picture of Lemuel Cook is available at http://www.burrcook.com/history/lemuel.htm

3)  A long sketch, including a photograph, of John Gray is in the book, Private Dalzell, his Autobiography, Poems and Comic War Papers, on Google Books (photo on page 188, sketch starts on page 189).

4)  A newspaper article about Daniel Frederick Beakman [the Bakeman above] appeared in the Bostom [Mass.] Journal newspaper on 20 April 1869, page 4 (accessed on www.genealogybank.com) titled "Death of the Last Soldier of the Revolution."  The last paragraph of the article says:

"Mr. Beakman had voted at every Presidential election since the organization of the Government, casting his first vote for Washington and his last for Gen. Grant."

5)  The Cincinnati (Ohio) Commercial Tribune newspaper pubnlished an article on 12 June 1869 (accessed on www.GenealogyBank.com) on page 8, titled "The Last Soldiers of the American Revolution - At Least One Survivor to England."  A transcription of a portion of the article says:

"...a response appeared in the [London] Times from a gentleman in Bath, who stated that a drummer who served in the Sixty-Second British Regiment in the war of the Revolution, is still living in that town at the age of one hundred and five years, that he was very feeble and unable to feed himself, that his pension was only six pence a day, but no argument could persuade him to go to the Union or the poor house.... His name is Jonathan Reeves and whether he is the last surviving British soldier that served in the Revolutionary War is not yet certain, for others still living may be announced in the Times, as some interest seems to be excited by the subject."

I searched through GenealogyBank and the NewspaperARCHIVES collection on Ancestry.com and did not see other newspaper articles dated after 1869.