(Not So) Wordless Wednesday - Post 247: A Four Generation Seaver Photo 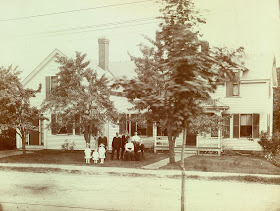 And with the photograph cropped a bit and enlarged: 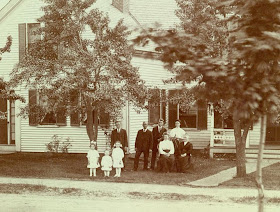 This house is located at 149 Lancaster Street in Leominster, Massachusetts. This picture was taken in about 1907 based on the children who are pictured, and the one who is not. The people in this picture are (left to right):* Evelyn Seaver (child born in 1903)* Stanley Seaver (child born in 1905)
* Marion Seaver (child born in 1901)
* Harry Seaver (male adult standing in back of Marion, born in 1884)
* Frank Walton Seaver (male adult standing, born in 1852)
* Fred Walton Seaver (male adult standing, born in 1876)
* Hattie (Hildreth) Seaver (female adult sitting, born in 1857, wife of Frank Seaver).
* Alma Bessie (Richmond) Seaver (female adult standing, born in 1882, wife of Fred Seaver)
* Sophia (Newton) Hildreth (female adult sitting, born in 1834, mother of Hattie (Hildreth) Seaver).
Frederick and Alma Bessie (Richmond) Seaver, my grandparents, are the parents of the three children, Marion, Evelyn and Stanley. Stanley was born in October 1905. I think that the picture was likely taken after October 1906. Their daughter, Ruth, was born in September 1907, so the picture was probably taken before then (Bess Seaver looks fairly "wide" in this picture, at age 26 - she's probably pregnant). Frederick Walton Seaver and Harry Seaver were sons of Frank Walton and Hattie (Hildreth) Seaver, my great-grandparents.Frank Walton Seaver was the son of Isaac and Lucretia (Smith) Seaver, my great-great-grandparents, who were both deceased in 1907.Hattie (Hildreth) Seaver was the daughter of Edward Hildreth (died in 1899) and Sophia (Newton) Hildreth, my great-great-grandparents.This is the only picture I have of Frank Walton Seaver (my great-grandfather), Harry Seaver (my great uncle, brother of Frank), and Sophia (Newton) Hildreth, my great-great-grandmother who died in 1923, outliving both her daughter and son-in-law.A copy of this photograph on cardboard was found in a cedar chest in the possession of my mother in about 1990. I had it duplicated and sent it to each of my aunts and uncles in 1990 - no one else had seen it to their recollection.