Do you remember the excitement in the genealogy world one year ago today?  I do!  We were so ready, armed with information from the Steve Morse Unified 1940 Census ED Finder tool and our searches in City Directories trying to find out where our family resided in April 1940.  We were going to find our parents and grandparents and aunts and uncles and cousins in the 1940 U.S. Census on the very first day that the census images were available.  365 days ago today.

We were also very ready to do some indexing of the 1940 U.S. Census too - and the project really was well planned and was executed within five months - that was a tremendous achievement for the genealogy community, and WE did it! 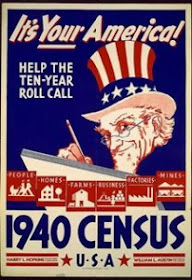 Thomas MacEntee posted The 1940 Census Release: A Year Later today to encourage discussion on this topic, asking the following questions (with my responses):

1)  What did the release of the 1940 Census mean to you personally? What do you think it meant for the genealogy community and industry?

The release of the 1940 Census meant to me that I might find out more about how and where my ancestral families lived - their occupation, their income, their address.

For the genealogy community, it was a real opportunity to work together in a collaborative effort for the greater good.  Indexing was a really big deal, and its success showed what a large group of volunteers could do to achieve a goal.  I enjoyed my efforts indexing the census, but got frustrated by my own mistakes in doing so, and by some of the arbitration results.

2)  What did you hope to find prior to the release of the 1940 Census images and were you successful?

I had hoped to find my parents living with their parents, and find my aunts, uncles and cousins also.  On a larger scale, I wanted to add 1940 U.S. Census records to my database for as many Seaver, Carringer, Auble, Richmond, Vaux, Leland, McKnew, Schaffner and other surnames as possible.

I was able to find most of the ancestral family members, with the exception of my grandmother, Alma Bessie (Richmond) Seaver (1882-1962) and my uncle, Edward R. Seaver (1913-2004).  I have not completely mined the 1940 Census for the one-name studies, although I find some once in awhile while researching other issues.

3)  Did you feel that the 1940 Census release lived up to the hype or was it overblown?

I thought that the first day when the images were released, and the National Archives site was overwhelmed by demand, was overly hyped, and the result was as I expected.  Once the images were on the FamilySearch, Ancestry and Archives sites, the records were able to be found using the Steve Morse Unified 1940 Census ED Finder tool, and later using the indexes as they became available.

The 1940 U.S. census is what it is - 134 million images of a decennial census, and therefore a very useful genealogy and family history record collection.  It's value to the genealogical community will increase over time, as more persons start working on their genealogy.

The one thing that was not hyped, or overblown, was the Steve Morse Unified 1940 Census ED Finder tool.  That worked so well for so many of us, that it was quickly adopted by Ancestry.com and the National Archives to help researchers find their families in the 1940 census.

4)  Are you still finding treasures in the 1940 Census and how have they helped your genealogy and family history research?

I am still searching the 1940 U.S. Census when I need to, especially when I find new descendants of ancestral family members and when I search for persons in my one-name studies who were alive in 1930 and later.  My goal is to make my database of ancestral families and selected surname groups as complete, correct, and sourced as I can, and having access to the 1940 U.s. census helps me achieve my goal.