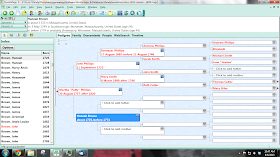 I've made some progress in the past two days searching for and analyzing possible Hannah Brown birth parents, which I've summarized below:

1) I've reviewed the notes I made back in the 1990s, and checked vital record books available on the Internet (mainly on Google Books and AmericanAncestors.org) and want to go through the candidates from the vital records and try to determine what additional records are available for each of them.  I found several more candidates born between 1715 and 1730, considering all of eastern Massachusetts, and have added them to my list.  Rather than provide full source citations, I will add the page number from the vital record books for the information found:

*  Hannah Brown, born 3 July 1728 in Littleton to Jonathan and Sybil (Dudley) Brown (page 36).  I can find no marriage record, or death record for this person.  She is a definite candidate for the wife of John Phillips.

*  Hannah Brown, born 15 May 1729 in Boxford, to Caleb and Elizabeth (Jewett) Brown (page 17).  I can find no marriage or death record for her, so she is a possible candidate to be wife of John Phillips.

2)  There are also Hannah Browns that married men between 1735 and 1750 in eastern Massachusetts.  These may be any one of the Hannah Browns not otherwise identified with a spouse above, a Hannah Brown not recorded in the vital record books, or the widow of a Brown that died:

*  Hannah Brown (of Rehoboth) and Peter Brown were married on 2 June 1748 in Rehoboth (page 60).  This is probably the Hannah Brown, born about 1722, the daughter of Daniel and Sarah (Mason) Brown.

4)  The possible candidates, assuming that I've captured all of the Hannah Browns born between 1715 and 1730) and married between 1735 and 1760 in eastern Massachusetts, include:

*  Hannah Brown, born 1728 to Jonathan and Sibyl (Dudley) Brown of Littleton and Concord.

My hope is that there are land and probate records for those parents that will either rule out or confirm that their daughter Hannah is the wife of John Phillips.

5)  I know that I haven't considered Hannah Browns born or married in western Massachusetts (say, west of Worcester), New Hampshire, Rhode Island or Connecticut.  Also, I haven't found Hannah Browns who don't have a birth record in the published vital record books.

As you can see, working on a person with a fairly common given name and surname in a small region of a state over a limited period of time can be a challenge!

This is an ongoing project - I'll deal with probate records (as best I can) in the next post in the series.