It's Treasure Chest Thursday - time to look in my digital image files to see what treasures I can find for my family history and genealogy musings.
The treasure today is the 1820 United States Census record for Simon Wade (one of my 4th great-grandfathers) in Glocester, Providence County, Rhode Island. 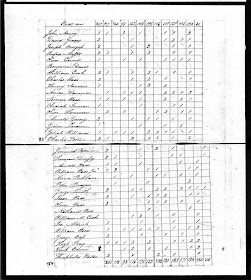 The snippet for the Simon Wade household is:

The source citation for this entry is:

While this census record doesn't provide exact ages for the household members, I think that I can estimate who might be in each age and gender group.

If Phebe Wade, the wife of Simon Wade, s one of the females in the over 45 age group, then I know that she was living at least until 1820.  The last known record for her is the birth of Lawton Wade in 1814.