Genea-blogger John Newmark (who writes the excellent TransylvanianDutch blog) started his own Monday blog theme many months ago called Amanuensis Monday. What does "amanuensis" mean? John offers this definition:"A person employed to write what another dictates or to copy what has been written by another."The subject today is a land deed in Worcester County, Massachusetts dated 25 September 1752, signed on 30 March 1754, and recorded on 29 October 1765, transferring two parcels of land in Southborough, Worcester County from John Phillips to Peter Brewer for 74 pounds, 13 shillings and 4 pence (right hand page on the image below): 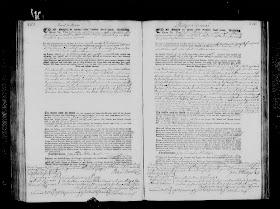 A transcription of the deed recorded in the Worcester County Deed Books by the Deed Registrar is (handwritten portions in italics, transcribed line by line):

2 To all People to whom these presents shall come, Greeting,
3 Know Ye, That I, John Phillips of Southborough in the County
4 of Worcester and Province of the Massachusetts Bay in New
5 England Husbandman

6 For and in Consideration of the Sum of Seventy four pounds thirteen shillings & four pence
7 to me in Hand before the Ensealing thereof, well and truly paid by, Peter Brewer of
8 Southborough aforesaid Husbandman

9 the Receipt whereof I do hereby acknowledge, and myself, therewith fully satisfied and
10 contented; and thereof, and of every Part and Parcel thereof, do exonerate, acquit and discharge
11 him the said Peter Brewer his
12 Heirs, Executors and Administrators, forever by these Presents: HAVE give, granted, bargained, sold,
13 aliened, conveyed and confirmed; and by these Presents, Do freely, fully and absolutely give, grant,
14 bargain, sell, aliene, convey, and confirm unto him the said Peter Brewer his
15 Heirs and Assigns forever, two Certain pieces of land both upland
16 and Meadow ground situate lying and Being in Southborough aforesaid one
17 piece Containing Eight Acres and a half and fifteen Rods be it same more or less
18 and is bounded at the Northeasterly Corner a Stake and heaps of Stones and is Easterly bounded
19 by land of aforesaid Peter Brewer, and on the land of William Collins to a white Pine Tree
20 at the Southeasterly Corner, and is Bounded Southerly by land of Benjamin Mixer
21 to a Red oak Tree there turning to a Maple Tree marked, and is Bounded Westerly
22 by land of Ephraim Woods to a Stake and Stones, then turning and Running to
23 the first mentioned heap of stones and is Bounded by land of Ephraim Woods
24 and Timothy Johnson. The other piece is Meadow Ground lying in Southborough
25 aforesaid, Containing two acres be the same more or less, and is Bounded
26 with a Maple at the Northeast Corner and is Bounded Easterly by a ditch
27 Twenty Rods to a Stake and Stones then bounded Southerly by land of Joseph Farr,
28 Sixteen Rods to a stake, then Bounded Westerly by land of Ezekiel Collins Twenty Rods to a
29 Stake and Stones, then Bounded Northwest by land of said Brewer Sixteen Rods
30 to the first mentioned Maple Tree. Together with what is standing, Lying or
31 growing the ???? with a Dwelling House on the first mentioned piece of Land.

32 To have and to hold the said granted and bargained Premises, with all the Appur-
33 tenances, Privileges and Commodities to the same bleonging, or in any wise appertaining to him
34 the said Peter Brewer his
35 Heirs and Assigns forever. To his and their only proper Use, Benefit and Behoof forever.
36 And I the said John Phillips
37 for himself, Heirs, Executors and Administrators, do covenant, Promise and Grant to and with
38 him the said Peter Brewer his
39 Heirs and Assigns, that before the Ensealing hereof, I am the true, sole and lawful Owner of the
40 above bargained Premises, and am lawfully seized and possessed of the same in my own proper
41 Right, as a good, perfect and absolute Estate of Inheritance in Fee Simple : And have in myself
42 good right, full Power and lawful Authority, to grant, bargain, sell, convey, and confirm said bargained
43 Premises in Manner as aforesaid : And that him the said Peter Brewer his
44 Heirs and Assigns, shall and may from Time to Time, and at all Times forever hereafter, by Force and
45 Virtue of these Presents, lawfully, peaceably and quietly Have, Hold, Use, Occupy, Possess and Enjoy
46 the said demised and bargained Premises, with the Appurtenances, free and clear, and freely and clearly
47 acquitted, exonerated and discharged of, from all and all Manner of former or other Gifts, Grants,
48 Bargains, Sales, Leases, Mortgages, Wills, Entails, Jointures, Dowries, Judgments, Executions, or Incum-
49 brances of what Name or Nature foever, that might in any Measure or Degree obstruct or make Void
50 this present Deed.

51 Furthermore, I the said John Phillips for myself my Heirs,
52 Executors and Administrators, do Covenant and Engage the above-demised Premises to him the said
53 Peter Brewer his Heirs and Assigns
54 against the lawful Claims or Demands of any Person or Persons whatsoever, forever hereafter to
55 Warrant, Secure and Defend by these Presents. In witness whereof I have hereunto set my hand
56 and seal this Twenty fifth day of September Annoque Domini one Thousand
57 Seven Hundred and fifty two and in the Twenty sixth year of his majesty's Reign
58 George the Second of Great Brittain King &c

The source citation for this deed record is:

This is a fairly straightforward land transaction between the parties for two pieces of land in Southborough, Worcester County, Massachusetts.  The metes and bounds are generally stakes, stones and trees with the neighbors named at the time of the writing.

Unfortunately, i have not found a deed where John Phillips bought this land.  I think that it is part of the land owned by his father, Ebenezer Phillips, and bequeathed to John by Ebenezer in his will dated 20 November 1745  and proved 21 August 1746 (see Amanuensis Monday - Ebenezer Phillips (1695-1746) Will, posted 22 November 2010).