Last week, in CrowdSourcing Opportunity: When and Where did John Louis Powell Die? (posted 29 October 2013), I described the question raised by my friend, John, about his grandfather's death date and death place.  Yesterday, I posted the newspaper article describing the attack on Louis B. Powell in Crowdsourcing Results: Louis B. Powell Attacked in Drumright, Oklahoma.

I received two more articles from Luin, found at the Oklahoma Historical Society, in a genuine Random Act of Genealogical Kindness:

1)  The first one defines the death date and place of Louis B. Powell: 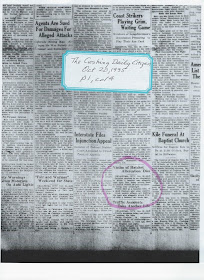 The transcription of the article in the Cushing [Okla.] Daily Citizen newspaper, dated 20 October 1935, page 1, is:

"OKLAHOMA CITY, Oct. 19 -- (U.P.) -- Injuries received in an altercation in which a hatchet was allegedly used upon him, today proved fatal to Louis B. Powell, 30-year-old farmer living near Drumright.

"Powell died at a hospital here, of a skull fracture and other injuries.

"Creek county officers are holding the man who allegedly struck Powell with a hatchet two weeks ago."

So that article defines the date of death as 19 October 1935 in Oklahoma City.

2)  The second article provides an obituary that names family members: 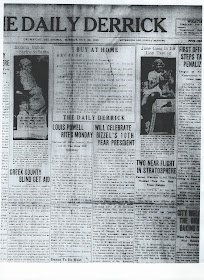 This article is from The Daily Derrick [Drumright, Okla.] newspaper dated Sunday, 20 October 1935, on page 1.  The transcription of the article is:

"The body of Louis B. Powell, 34, of Olive, who succumbed at 8:30 Friday night in the University hospital at Oklahoma City, will be laid to rest Monday afternoon following funeral services at the Olive school.

"Services will begin at 3 p.m. with the Rev. George P. Drake, pastor of the First Baptist Church here, preaching the funeral services and officiating.  The body will be taken to the Rose Hill cemetery for burial.

"The death of Powell followed a cerebral operation at 2 o'clock Friday morning for the removal of a blod clot on the brain.  Hospital attendants for a time after the operation believed that he had an excellent chance of recovering.

"Powell had been making his home with his mother, Mrs. J. Cis Powell in the Olive community since last January.  He moved here from Marshal, Okla., where he was an employe of the Shell Oil company for seven years.  He attended school as a boy at Schlegal and was well known in that community.

"Surviving relatives other than his mother include two sisters, Mrs. Ruby Adams, of Olive, and Mrs. Don Mead, of Oklahoma City.  He also leaves a wife and three children, Agnes Gene, 12; Alfred Nil, 8; and David Louis, 6.

"The Stubblefield funeral directors are incharge."

This article indicates that he died on Friday, 18 October in Oklahoma City.

The listing of his mother and the three children removes all doubt that I had about having the right person in this elusive person hunt.  My friend John's mother was known as "Jean Agnes." All three children were listed in the 1930 U.S. Census with parents Louis B. and Ethel Powell.  In the 1920 U.S. Census, Louis Powell resided with his mother "Jeis" and his sisters Ruby and Lucy.  "Jeis" name was, apparently, "Icis," according to several online family trees for some of these families.

The Find A Grave memorial for Louis B. Powell indicates that he died on 18 October 1935, and that matches the obituary death date.

3)  I also learned that Icis was still alive at the time of the obituary, and I found her Find A Grave memorial, as Icis Reeves Powell, in Blackwell Cemetery in Blackwell, Kay County, Oklahoma.  That provided her maiden name, and I was able to find several more generations of Reeves families in Ancestry Member Trees, which provides leads for more authoritative records. Icis's husband name was apparently Raleigh Ross Powell, and there are Ancestry Member Trees that include him also, although I've struggled to find records for him.

4)  The task here was to determine the death date and place of John Louis Burr Powell, father of Agnes Jean Powell, who was John's mother.  I think that I've accomplished that thanks to Luin and her act of genealogical kindness of doing the lookup in the Oklahoma Historical Society, and my friends and colleagues who responded to my crowdsourcing invitation.

One special note:  My friend and colleague Russ Worthington created an FTM 2014 database and private Ancestry Member Tree in order to help me sort out this research problem.  He also asked important questions, and offered hypotheses, to keep me on the right research track.

I'm in the process of providing my friend John with all of the information I've found so far. I hope that this helps him with his family probate problem.

There are still several unresolved issues:

*  My friend John gave me the name of John Louis Burr Powell based on information from his mother.  I have found no record that has the given name John.  The probate index record that Sharon found is for a Burel Powell (which I believe is this person, but don't have any evidence for it).

*  My friend John has a picture of himself as a baby with a man who was identified by family as his grandfather.  My friend John was born in 1941, and his grandfather, Louis B. Powell) died in 1935.  So who is in the photograph with my friend John?  It may be his mother's second husband, Loy U. Lathem (but he died in 1943).  It may be an uncle or cousin of Louis Powell, and it may be a brother, uncle or cousin of Ethel, the wife of Louis B. Powell.

5)  Once again, crowdsourcing by putting information on the Internet to a group of readers, or searchers, really works well!  Asking for help is an excellent way to obtain information and research suggestions.  The one who posts that information should be willing to "give back" to the genealogy community, and should give credit to those that help with the research problem.  I often tell my CVGS Research Group that "Each person knows something about genealogy, but no one knows everything about genealogy, and the knowledge of a group exceeds that of any one person in the group."  In this case, "my group" is Genea-Musings readers - about 4,000 of them read this blog every day.  Thank you all!!