Dawn Parrett Thurston has written a book titled The Parrett Migration, Their Story is America's Story about her ancestors' journey from Europe to America, and discovering the stories of their lives in America.

Information about the book and the author can be read at http://www.parrettfamilyhistory.com/. 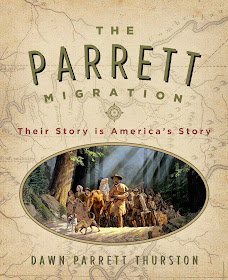 The publicity for this book says:

The Parretts were not generals, social reformers, or celebrated leaders of any kind. They were not the sort of people who have books written about them. They were large farming families, who acquired and cultivated large tracts of land, each succeeding generation moving on to the next frontier. Except for land, census, and military records, their lives were largely lost to history—until now.

Dawn Parrett Thurston, an eighth-generation descendant of Frederick Parrett, her earliest-known paternal ancestor, became intrigued with the family during her college days. As she embarked on what became a decades-long study of the Parretts, her research took her to Switzerland and Germany, where she followed the route of Frederick’s eighteenth-century emigrant journey down the Rhine River to the port where he embarked to America. She visited Frederick’s farm in Virginia’s Shenandoah Valley and drove the western migration routes taken by the four generations that immediately followed him, standing on the soil of their former farms in Tennessee, Ohio, and Iowa.

As the author examined available family records against the backdrop of American history, she came to see that the Parrett story was part of a much larger, fascinating narrative. The Parrett Migration spans nearly two hundred years of American history, a period when the country was in a constant state of flux, its borders ever expanding, its citizens embarking on exhausting and sometimes dangerous migrations in their quest for more land. The author discovered that her ancestors were on the trails during all the major migrations, traveling on foot, on horseback, and in covered wagons, forsaking the comforts of a settled situation, even a prosperous situation, to carve a new life for themselves out of the wilderness. The Parrett Migration is more than a family story, it turns out; it’s America’s story.

Bio:  Dawn Parrett Thurston has taught memoir and family history writing for nearly two decades. She is the co-author of  Breathe Life into Your Life Story: How to Write a Story People Will WANT to Read and Remembering William and Bella (Bullock) Miller. She earned a bachelor’s degree in English from UCLA and a master’s in communications from California State University, Fullerton. She and her husband live in Orange County, California.

John Colletta has reviewed Dawn's book and had this to say about it:

In The Parrett Migration, Dawn Thurston has achieved an engaging saga of America’s formation. Inspired by the journeys her ancestors took over a span of 200 years—from the German Rhineland to the colonial East to the 20th-century Pacific coast—Thurston follows in their footsteps—literally!—and takes us along. With easy, vivid prose and lavish illustration—maps, documents, engravings, photographs, and more—she leads us from one hearty, optimistic and energetic family to the next, generation to generation, from Virginia to Tennessee to Ohio to Iowa to California… Westward ho! This meticulously documented narrative is brought to life with scenes reimagined from the past—scenes always clearly introduced as such. This monumental work raises the standard for family historians who aspire to write narrative accounts of their ancestors’ lives. Thurston has transformed a personal quest into the quintessential human journey we can all understand, appreciate and enjoy.—John Phillip Colletta, PhD

You can order this book on Amazon - see http://www.amazon.com/The-Parrett-Migration-Their-Americas/dp/0990384365/
The URL for this post is:  http://www.geneamusings.com/2014/06/book-notice-parrett-migration-their.html

Disclosure:  Dawn offered to provide a book for my review, but I declined because I could not read it and review it in a relatively short period of time.  I did say that I would publish information about the book so that it received more publicity in genealogy circles.