Sometimes a reader highlights something about the Seaver family history that is really interesting.  Matt contacted me on Ancestry.com because he ran across an interesting article in a historical newspaper.  He asked if I was interested in seeing the article, and I said that I was, so he forwarded the link to me of the Wolverine Citizen [Flint, Mich.] newspaper, dated 23 January 1858. 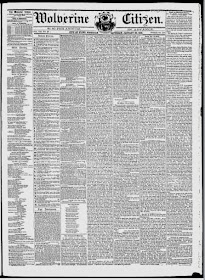 I struggled saving readable images from the Google News archive, and finally saved the story bit by bit using the Microsoft Windows Snipping Tool so that I could transcribe it.  It took 61 snips to get it all.

I am going to transcribe the articles in a series of blog posts - who knows how long this will take.  I hope my readers enjoy it.  Note that this is a reporter's summary of the trial, not the trial court transcript.


Trial of Mortimer Seaver
For the Murder of her Father, Aaron Seaver, in Grand Blanc

The trial, of this case, set down for the Special Term of the Genesee Circuit Court, commenced on Tuesday, before his Honor, Judge Turner.  The public interest manifested in this case, is hardly inferior to that shown upon the trial of Solomon Johnson, owing to the relation existing between the prisoner and the victim, and the fact that the latter was an old and esteemed resident of this County.

The case for the People is conducted by ALEXANDER P. DAVIS, Esq.; and the prisoner is defended by MOSES WIENER, Esq.

The case was opened by A.P. DAVIS, Esq., Prosecuting Attorney, who read the indictment, and stated to the Jury in his usually clear and lucid manner, what he expected to prove.  He regretted the necessity which has arisen for this prosecution, said the evidence upon which he relied was mainly circumstantial, explained to the Jury the difference in the nature of direct and circumstantial testimony, and the relative weight to which the latter was entitled, on trials of this kind.  He described the nature of the ground around the spot where the murdered man was found, as a very important feature in the circumstances which must determine how the deceased came by his death wound, and exhibited a map of the premises, in illustration of his description.

The prisoner looks to be about eighteen years of age, of slight form, and light complexion; with nothing very unfavorable, not yet prepossessing in his appearance.  During the reading of the indictment, nor at any time during the proceedings did he exhibit the least sign of emotion that we could discern; or display more concern than the most indifferent spectator in the Court Room.


The first witness called was Benjamin Phillips, who testified that he resides in Grand Blanc, between a half and three-quarters of a mile west from the Seaver farm.  Witness knew Aaron Seaver, the deceased, who resided also in Grand Blanc.  Witness saw him after he was dead, on the flats east of south of Mr. Seaver's house.  It was between 60 and 70 rods distant from the house.  There is a lane from the yard of the house, running south-east to where the body was found.  Deceased lay on his back -- his head a little east of south.  Mrs. Seaver, and Charles, her son, were at the body when witness got there.  He thinks it was on a Friday. It was in the month of September 1857 -- he thinks the 25th.  The body had not been disturbed, as witness was told, except to shove the hands which lay out, towards his sides.  Witness could not tell by the way the deceased lay on the ground, how he came by his death.

Saw no blood before the body was disturbed.  Witness helped to take the body to the house.  Mr. James Rice and Mr. Jeremiah Slack assisted.  They put it in a wagon.  They discovered the cause of his death as they raised him up, when Mr. Charles Seaver, and Mr. Luther Seaver, said -- "see the blood."  The first witness saw of blood, was on his own hand and sleeve, when he took his hand from under the body, after lifting it to the wagon.  He then looked on the ground, and saw a little spot of blood directly under where the back of Mr. Seaver had lain on the ground.  Thinks it was not larger than a cent would cover.

When they took the body to the house, Mr. Slack said he would see the cause of death, and raised up the body on some boards, when witness saw a bullet hole in the lower part of the back of deceased's vest.  Saw the prisoner down at the field before they took up the body.  He came a short time after witnesses got there.  Witness asked prisoner where deceased's scythe lay.

The ground where the body lay, was level meadow ground, with a little stream running through it; thinks there was water running in the stream, but is not positive.  West of where the body lay, there was mowing fresh done -- right back of it.  Deceased was mowing and had fallen a little forward of his last clip.  Saw a scythe there.  The field was all mowed, except a very little.  Where the deceased was mowing the swarth was not quite out, going to the east.  It was close, beside the south fence.  There was another fence, south of that, and a lane between them.  There is quite a rise in the ground ....... of the lane; north of the body, the ground was level for a space, and then it commences to rise; thel ot is 80 rods, east and west.  Thinks he heard the prisoner say that he was mowing west of where the body lay.  There is another hill, with a hollow between the two, before coming to the house.

Cross examined -- Thinks it was about 11 o'clock in the forenoon when the body was found.  The body lay on the back.  There was no appearance of struggling.  He seemed to have fallen dead as he was shot.  Heard that the prisoner had gone to Mr. Rice's, to tell him of the murder, and have him come over.  Found the body within about two feet of the fence.  The fence is made of good sized rails, and is about 5 or 6 feet high -- the most southerly fence was about one and a half rods distant -- a similar description of fence to the one near where the body lay.  About twenty rods south west of where the body lay, is a piece of woodland - the elevation there is not so great as more south.  There is a piece of woods in an east direction about five or six rods from where the body lay; the land is level there.  The scythe was hanging upon the fence when witness saw it.  Noticed a whet-stone on the corner of the fence, near the scythe.  It is 60 to 70 rods from where the body lay to the house.

Direct examination resumed -- There is a lane east of where the body lay, and two fences between there and the woods spoken of.

Well - we have a murder of a respected man, Aaron Seaver,  in Grand Blanc, Genesee County, Michigan.

Already we have the names of the judge, attorneys the jurors, and a witness - this was a part of their life story, and they all probably remembered it to their death, and perhaps told stories about it to their children and grandchildren.

Thank you to Matt for providing the link to this interesting newspaper article.