The subject today is a 1797 land petition filed by Abraham, John and Daniel Defoe with the Government of Upper Canada on their father's service during the American Rebellion (two images): 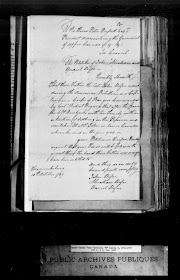 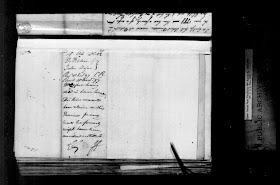 The transcription of the petition is:

To His Honor Peter Russell Esq^re
President Administration of the Government
of Upper Canada &c. &c. &c.
In Council
The Petition of John, Abraham and
Daniel Defoe --
Humbly Sheweth
That their Father the late John Defoe served
during the American Rebellion as a Cap-
tain in a Corps of Rangers Commanded
by Col. Robert Rogers & that after the peace
he left New York with his Family with an
intention of Settling in this Province and
was taken Ill at St. John's in lower Canada
where he died in the year 1794 ~
your Petitioners therefore Humbly
request that your Honor will be pleased to
grant them the land their Father was or might
have been entitled to.
And they as in duty
Fredericksburg                 bound will ever pray
10th October 1797            John Defoe
Abraham Defoe
Daniel Defoe

The transcription of the card is:

The source citation for this document is:

Apparently, John, Abraham and Daniel Dafoe, three sons of John Ernst Dafoe (1723-1795) petitioned for land in Upper Canada on account of their father's service in the Roger's Rangers on the British side in the American Revolution.  This petition was denied because John Dafoe died in Lower Canada (i.e., Quebec) rather than Upper Canada (i.e. Ontario).

The value of the petition is that it names three sons of John Defoe, provides John Dafoe's death year and place, and his service with Roger's Rangers.