One of the most recent databases added to Ancestry.com is the U.S. Headstone and Interment Records for U.S. Military Cemeteries on Foreign Soil, 1942-1949.  I went searching for Seaver names in it today while I had a little free time (I do love the Hunt!).

There was only one exact match - here is the results page for my search: 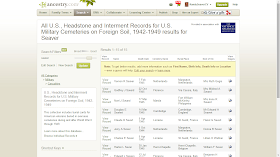 Vernon R. Seaver died during World War II, apparently in the Netherlands, and is buried in the Margraten U.S. Military Cemetery cemetery there.  Here is the index card from the database: 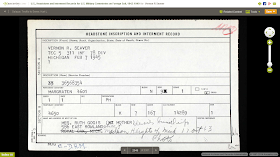 I checked my RootsMagic database and did not have Vernon R. Seaver, or anything close to the name, in the database.  I have a residence of his mother, who has a different surname.

Can I find Vernon Seaver in, say, the 1940 U.S. Census?  It was a struggle - I searched for Vern* Se*v* with a mother Ruth and found the Stanley J. Gogis family (indexed as 'Gogin') in Fenton, Genesee County, Michigan: 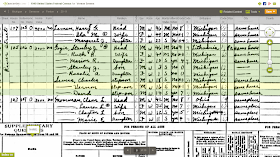 There are three "Severs" children listed (indexed as "Sevens") - Charles (age 18), Vernon (age 16), and David (age 14).  They are listed as "step-sons" so this may be a second marriage situation for their mother.  There are also three Gogis children.  Ruth is age 40.  From the estimated birth dates of the Seaver children, and the estimated birth dates for the Gogis children, the marriage of Ruth to Stanley Gogis may have occurred between 1926 and 1930.

Are the three Seaver boys in the 1930 U.S. Census?  Of course they are - in Fenton, Genesee County, Michigan, with their step-father Stanley J. Gogis (indexed as Gogin), mother Ruth (age 30), and the first Gogis child.  The Seaver boys (aged 8, 6 and 4) are indexed as "Seavert" although the writing is pretty clear - C in Charles looked like a t to the indexer, I guess.  I've seen worse: 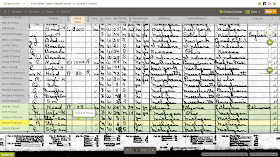 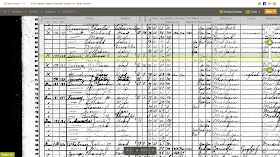 Is this the right family?  It's hard to tell.  although Ruth is not a common first name, it's not rare - there could have been several women named Ruth Seaver in southeastern Michigan in the 1920 time frame.  I need more information! 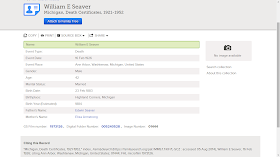 This record provides a death date of 16 Feb 1926 in Washtenaw County, Michigan.  It provides a birth date and place, and parents names. There is no mention of his spouse's name.

I then looked in Ancestry and FamilySearch for birth, marriage and death records for the three sons, Charles, Vernon and David Seaver (using wild cards to cover variations in surnames).  That resulted in a death record for Charles William Seaver (1921-1942) on FamilySearch: 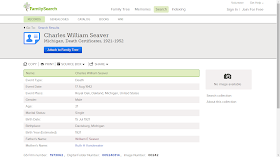 I looked in the newspapers on Ancestry.com and on GenealogyBank to see if there might be a death notice or obituary in a Michigan newspaper in 1945 for Vernon, but I didn't find one.

Then I thought about Ruth - she lost her oldest son in 1942 at age 21, and her next son in the war in 1945 at age 22.  I found nothing at all about David Seaver.  I'm sure that the deaths of her two sons were sad and depressing for her, but she apparently persevered and lived out her life in Michigan.

It was fun doing the research, and being able to succeed in finding Vernon's ancestry (he is my 5th cousin, 3 times removed), and adding him to my database.  It took less than an hour to do the research here.