The subject today is a 1929 order of a hearing, a publisher's affidavit and the published Notice of Hearing to define heirship of the estate of Devier J. Smith in Red Willow County, Nebraska: 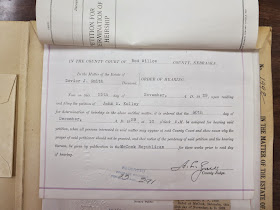 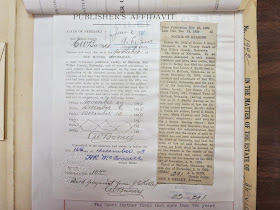 The transcription of the "Order of Hearing" document (typed portions underlined, handwritten portions in italics):

01 IN THE COUNTY COURT OF   Red Willow   COUNTY, NEBRASKA.

The transcription of the "Notice of Hearing" document (typed portions underlined, handwritten portions in italics):

A source citation for these documents is:

The first paper in this probate file was displayed and transcribed in Amanuensis Monday - Post 230: 1929 Petition for Determination of Heirship of Devier J. Smith Estate (posted 11 August 2014).  I also explained the "back story," how I obtained images of this probate file, and Devier J. Smith's relationships in the first blog post.