Amy Johnson Crow suggested a weekly blog theme of "52 Ancestors" in her blog post Challenge:  52 Ancestors in 52 Weeks on the No Story Too Small blog.  Here is my ancestor biography for week #51: 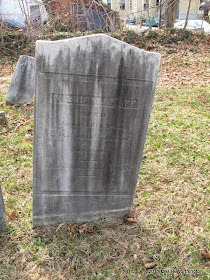 2)  EVENTS (with source citations as indicated in brackets):

3)  MARRIAGES AND CHILDREN (with source citations as indicated in brackets):

The parents of William Knapp are not known.  The records of Dutchess County, New York  are very sparse for this time period.  A search of available vital records indicate there were many Knapp families in Dutchess County in the 1770-1790 time period.  Review of the 1790 U.S. census shows many Knapps in southeastern New York.

William Knapp married Sarah Cutter in about 1804, probably in Woodbridge, New Jersey where Sarah Cutter was born and raised.[2]  They had 11 children,  born between 1805 and 1831, all of whom reached adulthood, and all but one married.  The Supplement mentioned above provides some of the data on the children of William and Sarah (Cutter) Knapp.

Data in Catherine Knapp's 1894 obituary indicates that William Knapp was one of the first settlers of Newton, Sussex County, New Jersey, and had a very extensive acquaintance.  He was a Justice of the Peace for many years, and resided on Spring Street on the property later owned by Moses McCollum.  The Knapps were among the earliest members of the Newton Methodist Episcopal Church, and with others of that faith, worshiped in barns and other places most convenient, traveling sometimes six or seven miles to service.  This was before the members were sufficiently numerous to build and worship in an edifice of their own.

*A horse and wagon stolen from William Knapp, on a forged order."

" 13. A.C. Potwine goes to New York to remain as buyer of goods for store in Newton.  The firm has engaged William Knapp to make morocco shoes, and the drugs and medicines sold are inspected by Dr. Hedges."

"14. Edward Stewart advertises sale of houses, including two-story stone house he occupied, 400 yards from Court house on Hamburg road, (Water Street) lately built; a frame house adjoining; a two story house on Spring street on one of the Conover lots, a house and lot on Liberty street, opposite Barnabus Carter's; half of the house and lot occupied by William Knapp, which was built by Hugh McMahan, and situated on Spring street, adjoining Zephaniah Luce Lot."

In the 1840 US Census, the William Knapp family resided in Newton, Sussex County, New Jersey.[4]  The household included:

In the 1850 US Census, this family resided in Newton township, Sussex County, New Jersey.[5]  The household included:

William Knapp was a member and treasurer of the Harmony Mason Lodge in Newton in 1852, according to an 1888 article about the lodge.

His death record is in the Newton, Sussex, New Jersey vital records.[1]  The death record for William Knapp includes this information:

An 1860 plat map of Newton NJ shows a house of W. Knapp near the southwest corner of Adams Street and Spring Street in Newton.

William Knapp and his wife, Sarah Knapp, are buried in the Old Newton Burial Ground  in Newton, Sussex County,  NJ.[6-7]  The cemetery is located behind properties on Main and Halsted Streets, with access by a driveway between the properties at 77 and 79 Main Street in Newton.  The inscription on the gravestone says:

There are no probate records for William Knapp in the Sussex County, New Jersey Estate Index, 1804-1974 (accessed on FamilySearch.org).