The subject today is the 1803 setting off of the remainder of the real estate to five children in the estate settlement of Simon Gates (1739-1803) of Gardner, Worcester County, Massachusetts in Worcester County Probate File 23252: 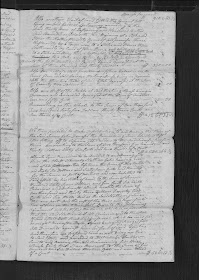 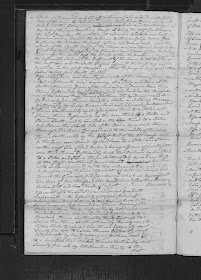 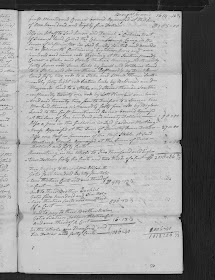 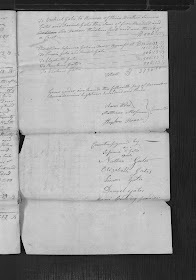 The transcription of the images above is:

Dressen in the Kitchen the front Entery and Bakers hole and the
whole of the South half of the Cellar and an Equal priviledge
of passing and Repassing Up Chamber and Down Cellar to Occupy
the Eastwardly Shed and the East part of the Barn to the Middle of
the west bay and the South Scafold against the West bay and a
priviledge in the West Thrashing floor to Carry in hay and other
fodder to fill said South Scaffold.

Also we Set off to the said Simon and Daniel Two fourth
Division Lotts in the Eastwardly part of said Gardnerr Con-
taining According to the Deeds thirty Seven Acres be the
Same more or less Bounded as follows, Begining at a
Stake and Stones thence Westwardly by lott Number one
Hundred and one one Hundred and eighteen rods to a
Hemlock thence Southwardly thirty Eight rods to a
Spruce tree thence Southeastwardly twenty one rods
fifteen links to a spruce tree thence Eastwardly about
Twenty five rods to a Stake thence Eastwardly about
Fifty five rods by land belonging to Aaron Wood Esqr
to a hemlock tree Marked thence Northwardly about
Seventy five rods by lott Number thirty to the

The source citation for this part of the estate record is:

This is the sixth of several transcriptions from the Estate packet for Simon Gates (1739-1803), my 5th great-grandfather.  He died 11 March 1803 in Gardner, Worcester County, Massachusetts.

In this part of the estate file, all part of the report by the three men commissioned to divide the real property of Simon Gates among the heirs, we see that the remainder of the land owned by Simon Gates at his decease was passed to four of his sons (two of whom were represented by a guardian) and a daughter.  The eldest son, Nathan Gates, quit claimed his share of the estate because he had already been given a portion of it and he owed his father money loaned to him before he died.  The other siblings agreed to this quit claim.  The remainder of the estate added up to $ 2530.66-2/3, meaning the portion of each of the five heirs was $ 506.16-1/3.  The two sons who received the other part of the home farm had to pay money to several of their siblings in order to make the numbers come out even.

I am always amazed that the commissioners can make the numbers come out correctly (perhaps they did the sums on a scratch paper first!  And double checked their calculations).

In the next post, I will transcribe the final account of the executors of the estate of Simon Gates.
My ancestor is the first son, Nathan Gates, who quitclaimed his interest in the real estate of his father.  If, as the oldest son, he was to receive a double share of the estate, the money he was given and borrowed add up to about the double share value.  Perhaps they thought it was too difficult to include it, or the other heirs thought it wasn't worth the effort.