What I knew was that the Simon Gates home farm in 1803 was located in the "northeastwardly" part of Gardner, with neighbors of Daniel How, John and Lucas Dunn, Edward Jackson, and Josiah Kendall.  Here is the home farm plotted using the Deed Platter from GenealogyTools.net I found online: 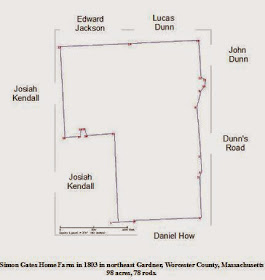 The breakthrough came when I downloaded the Gardner, Massachusetts history book from Google Books.  Pages 30-31 described the family of Simon Gates: 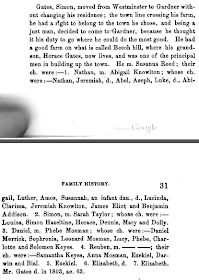 The book provided this information about the Simon Gates home farm:

"Gates, Simon, moved from Westminster to Gardner without changing his residence; the town line crossing his farm, he had a right to belong to the town he chose, and being a just man, he decided to come to Gardner, because he thought it his duty to go where he could do the most good.  He had a good farm on what is called Beech Hill, where his grandson Horace Gates now lives, and was one of the principal men building up the town."

So there is my clue.  Several years ago, I found an 1870 map of Gardner online (I don't recall where...bad genealogist!), so I looked in the "northeastwardly" part of Gardner and easily found the name "H. Gates" on the map.  This area is just west of Westminster, and just east of the railroad that is on the 1870 map and the current Google map.  I circled the name "H. Gates": 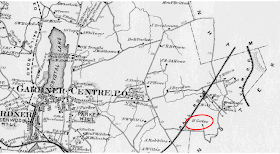 Now I think that this is the place - how can I find the location on a current map?  I opened Google Maps, and entered Gardner, Mass. and zoomed in a bit on the eastern part of Gardner with the approximate dimensions of the 1870 map image above:

Zooming in a bit more, I saw the roads near the Correctional Facility looked somewhat like the boundaries on the platted map.  I guessed at where to put the red circle to represent the approximate location of the "H. Gates" (and therefore Simon Gates 1803) farm: 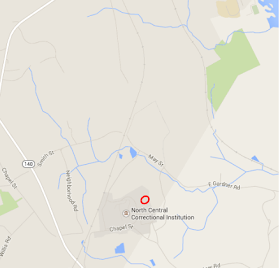 Zooming in even more, I guessed at where the home farm boundaries are [If I were a great genealogist I would have used the rod measurements, converted them to the Google Map scale, and plotted them accurately] and drew them on the map below: 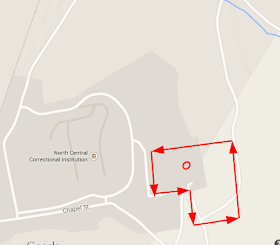 These may be slightly off length-wise and angle wise, but I think they are approximately correct.

It appears that the 1860 home farm house was on the grounds of the North Central Correctional Institution in Gardner.  Here's a satellite view of this area: 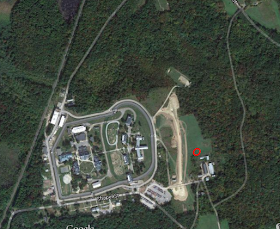 If I've sited the red circle correctly, it looks like the home farm was in the area just outside the  eastern institution fence.  I guess I won't try to visit the site the next time I'm in Gardner!!

For reference purposes, the location is just north of the intersection of Chapel Street and North Gardner Road.