I wrote Farm-Spotting: The Simon Gates Home Farm in Gardner, Massachusetts on 9 January 2015, and had an interesting response from Sharin in my email.

"For over thirty years I have done genealogy research and whenever possible I have attempted to find deeds for the people that I am doing the research for.  I have found that many times neighbors will become relations or they may be the reason the person moved to the property.

It is very important to know when the survey was done and to think about the equipment used.  The early transit was a simple compass with a means to sight along a line.  Reading accurate angles was near impossible.  The compass would often be influenced by local soils containing iron.  Distance was measured using a chain and temperature corrections were not done.  I try to locate the survey on a topo map as often as I can.  The survey may have points that still appear on the map.  The map will also indicate how difficult the terrain was to do the survey.  With these issues the survey normally do not close and the surveyor did not use more modern methods of distributing the error.  If we think about the simple issue of writing field notes at the time of the early surveys.  With all of this it is amazing just how accurate these early surveyors were.  Another issue we must keep in mind is that the surveyor did not have access to the true north meridian, so most of the surveys need to be rotated by the declination of the area.  The declination can be different at the time the survey was done, however rotating it to the present declination and moving the plat around the map can give you a pretty good idea where the survey was done."

Sharin's comments above are very cogent and valuable.  I had forgotten about the magnetic declination - the true north meridian.  At present, Gardner is -14 degrees 30 minutes west of true north.

I have prepared two topo maps, that I attach as pdf and one spreadsheet showing metes and bounds where I show possible locations for the survey.  Number one is to the north of where you believe the plat was.  I located it in this area because several points of the survey mention Dunn Road.  I can not find history of this road, but many times the name of roads remain the same although they probably have been adjusted over the years.  The red plat has been rotated using the present declination and generally match the road.  The blue plat has not been rotated and would have to be moved north to match the road.  I don’t believe the blue plat is correct because of the swampy area and not much of an area for farming.  This land of course may be much different from 1803.  The map number two is down in the area that you believe the property is.  Again the red plat is rotated for declination and the blue one is not.  If Dunn Road existed in 1803 at its present location, it is possible that these folks could have moved between 1803 and 1870 to the location to the south.  I am also attaching a spreadsheet of calculations."

The spreadsheet extended the columns to include the distances in feet, not just in rods and links.  That pointed out to me that I had not put the actual distances on a scaled map - and consequently, I had under-sized the land area on the 1870 Gardner map in my blog post. 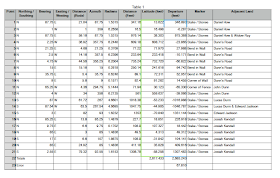 The chart above with the actual distances indicates that Simon Gates' parcel of land was about 2,070 feet across the top of the parcel, and about 2,660 feet from top to bottom of the parcel.

In the discussion above, Sharin used topographical maps to try to find "Dunn's road" (the eastern edge of the parcel of land).  There is a Dunn's Road in Ashburnham, the town just north of Gardner.

The topographical map for Gardner is shown below (obtained from Sharin), and she has scaled the Simon Gates' parcel of land and placed it in two spots: 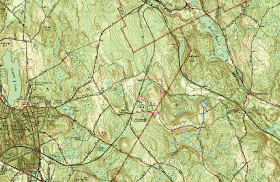 The red outline for the Simon Gates' parcel shows the placement of the parcel on the topographical map, and is not rotated for magnetic declination.

It may be that the red outline is actually the bounds of the Simon Gates farm.  If the survey was taken without compensating for magnetic declination, then it would be rotated 14.5 degrees clockwise from the starting point.  I think, but am not 100% sure, that the red outline of the Gates parcel is situated just about right.

Here is a closer view of the red and blue outlines of the parcel relative to the roads.  The topographical map used was created in 1946, so the parcel seems to encompass the State Hospital (at the time) - now the Correctional Facility. 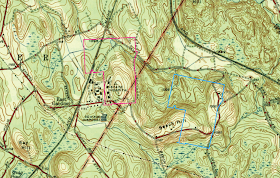 Here's a closer look at the red outline of the parcel.  Look at the eastern boundary of the parcel - it is almost along the dashed line road on the topographical map.  Look also at the "notch" in the southern  boundary (about halfway up the western boundary) - it is exactly on the present-day railroad right of way. 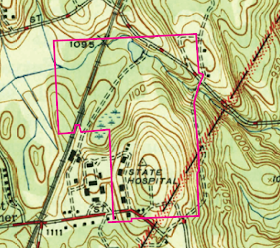 The topographical map also indicates that the Simon Gates parcel is at the top of the western part of Beech Hill, and that the land includes a significant hill that rises over 100 feet above the present railway bed.

I revised the Google map to draw the approximate outlines (straight lines) of the Simon Gates parcel relative to present day roads and buildings: 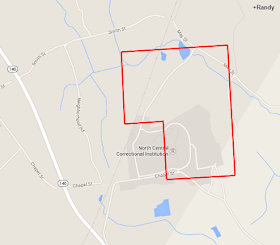 My next task in this process is to find the Worcester County, Massachusetts deed where Simon Gates obtained the land.  More on that in a future blog post.

My thanks to Sharin for taking the time to work on my little project here, to share her expertise, and to demonstrate excellent practices when doing a task of this nature.  I learned a number of things that will help me in the future.