I received an email this morning from Madonna Marks, who wrote (quoted with permission):

"I was involved in the production of a show involving genealogy.  The show was produced in 2006 and was shown on PBS stations around the country.  It won an Illinois State Historical Society Award of Superior Achievement, a Telly Award, and was nominated for a regional Emmy Award.  The folks behind the show involved a group of people, all with their own talents, coming together for a project they believed in.  We were unable at that time to obtain financial backing.  I have been watching the various genealogy shows and believe that our project fills a niche that still isn't being met.  We are thinking of trying to put it out there again and I am looking for your opinion." 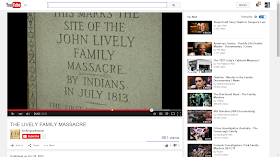 "The Lively Family Massacre" video is on YouTube at https://www.youtube.com/watch?v=PMqg70usMWY and I have embedded it below:


This is an interesting and well-produced family history video.  It should be of immense interest to persons descended from John Lively and his wife, and their surviving daughter.

I like that they used a "normal person" as the family history seeker investigating their own family, rather than a celebrity whose ancestry is handed to them.  The 25 minute video moves right along from clue to clue to finding records and artifacts.  The use of a reenactment of the massacre is effective.  Seeing the actual sites, and having the seeker participate in finding artifacts, is excellent.

My opinion is that there is a place for family history story videos like this.  It would be great if PBS or another television network sought family history stories like this, and produced them so that millions could watch them rather than hundreds finding it on YouTube.

My opinion is:  Go for it, Madonna!  I hope that you are successful, and that we all enjoy and benefit from your work.

What family stories do you have that might be a candidate for a family history video like this?