The treasures today is the  "1809" death record of Simon Gates in Gardner, Worcester County, Massachusetts: 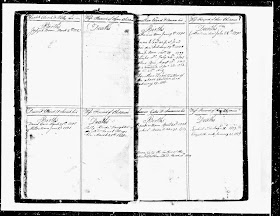 The snip for the death record of Simon Gates is: 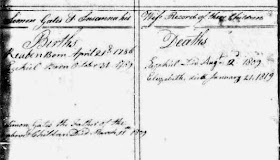 The transcription of the record is:

Simon Gates and Susanna his Wife Record of their Children

Simon Gates the Father of the
Above Children Died March 11th 1809.

That's pretty straight-forward, isn't it?  The death of Simon Gates, husband of Susanna and father of at least Reuben, Ezekiel and Elizabeth, is recorded as 11 March 1809 in Gardner, Massachusetts.  The date is repeated in the published Gardner Vital Records book.  Both are WRONG!

However, the letters of administration for Simon Gates says that he died before 6 April 1803 (see Amanuensis Monday - Post 247: Letter of Administration for Estate of Simon Gates (1739-1803)) and his gravestone inscription  (in the photograph in his memorial on Find A Grave) clearly says he died 11 March 1803 in his 64th year.

My judgment is that the handwritten Gardner Births, Marriages and Deaths book is a copy of an earlier town record book, since the information, which spans decades, seems to be written in one hand.  So the book is a Derivative source, written at an indeterminate time.  The information may have been written incorrectly, or transcribed incorrectly.  The probate record is an Original source, written near the time of the death of Simon Gates, probably on 11 March 1803.

Simon Gates and Susanna Reed are my fifth great-grandparents.