I received this from BillionGraves, one of the cemetery resource websites:

It's March again--and basketball fury's in the air.  The NCAA's March Madness Tournament has begun! U.S. College basketball might not be for you, so we've decided to host our own BillionGraves competition! It's the "March 2015 BillionGraves Madness"! 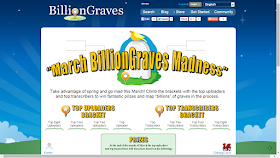 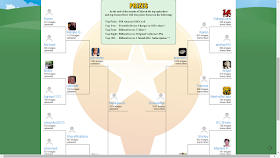 It can't be any better than doing your favorite thing- taking pictures of headstones and transcribing them, AND winning prizes!
So take advantage of the rising temperatures to capture some headstone images at your local cemetery or get your transcribing game on. The more you do, the higher up on the bracket you'll be! You won't want to miss out on these awesome prizes!
Do a weekly check of the BillionGraves blog or March BillionGraves Madness page to make sure at the end of the month you walk away with one of our awesome prizes!
PRIZES:
*For international winners, due to shipping restraints by shipping providers, a gift card worth the same USD monetary value to the prize you have won will be sent to your BillionGraves registered email within 4-6 weeks of the close the competition.

**The 1 Month BG+ Subscription is in addition to those volunteers who upload more than 2500 photos and/or transcribe more than 500 records.