I answer the occasional query for my local genealogical society.  Recently, we received one from Rick who said:

"   I am looking for information for an estate belonging to a Thomas Trent who passed away many years ago. He owned property on the 1000 block of Broadway in Chula Vista, we used to live directly behind him when I was a kid. He was already old and I would help him get around his house because he was so old. Anyway I remember one day my mother telling me an attorney came by asking questions about me because he wanted to add me to his will."

Rick wanted to know if there was a will, and was he included in it.

To find out if there is a Probate record for Thomas B. Trent who died in 1977, I went to the Superior Court of San Diego website (http://www.sdcourt.ca.gov/) and found the Accessing Court Case Files portal page: 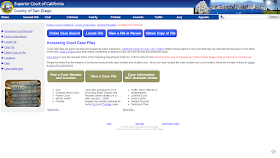 The San Diego Superior Court has digitized the indexed probate records from 1974 to the present, and has images available online for files from 2008.  Before 1974, the files are indexed in record books, and the actual files are on microfilm or microfiche.

I wanted the Probate records for 1977, so I clicked on the green button to "Find a Case Number and Location" (which includes Probate). That took me to the "Party Name Search" page: 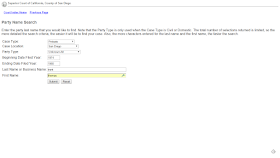 I clicked "submit" and the search results appeared: 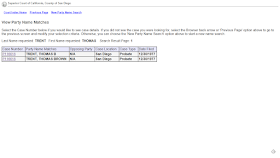 Two items were listed on the same date, with one Case Number = P116618.  I clicked on the Case Number link and saw the description of the file: 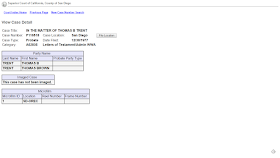 The Probate record "In the Matter of Thomas B. Trent" was filed on 30 December 1977.  It is a case with "Letters of Testament/Admin WWA."  I think that means that it is an Administration file With Will Annexed (but I may be wrong!).

The next issue is "how do I obtain it."  The web page to "How to View a Court File" says that "The public may request and view a file by filling out the required court form and showing a valid driver's license or other valid photo I.D. which court staff will record."  However, the file must be viewed at the court's business office, and cannot be removed.

The "Obtain a Copy of a Court File" page is: 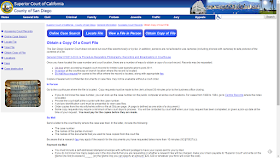 "Once you have located the case number and court location, there are a number of ways to obtain a copy of a court record. Records may be requested:

I want the "In person" option, which says:

Go to the courthouse where the file is located.  Copy requests must be made to the clerk at least 30 minutes prior to the business office closing.
The "View Case Detail" screen (the third one shown above) had a button for "File Location" which I clicked, and saw: 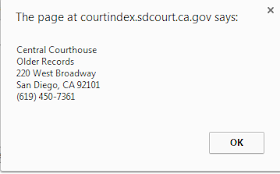 So in order to see this file, I need to go to the Central Courthouse in downtown San Diego and go to the Other Records office, which is in the Basement, and follow the directions given above.

I need to check back with Rick and see if he is willing to pay the fee for me to obtain the probate file in question.  It appears that the cost of obtaining the file is 50 cents per page copied, but it has to be copied by the Court personnel, and I would have to make a second trip to the courthouse to obtain it.  Alternatively, Rick could save me the trip by ordering the file copies by mail, including paying the correct fee.

Have you searched for Court records in the jurisdictions where your ancestors and relatives (parents, grandparents, aunts, uncles, etc.) lived and died?  Many counties have these resources available, for a price, like San Diego County above.