Eowyn Langholf sent this notice via email about the Global Family Reunion:

The Global Family Reunion has just launched a crowdfunding campaign with two not-so-minor goals: Unite the world and battle Alzheimer’s.

The Global Family Reunion will take place June 6, 2015, and aims to be the biggest, most inclusive and most entertaining family reunion in history. Everyone is invited. It will include presentations by celebrities, genealogists, and famous scientists, music, comedy, games, interactive exhibits and food. The main event will be held on the grounds of the world’s fair in New York, but there will be simultaneous parties around the world.

It’s also a benefit to raise money for Alzheimer’s disease. When you purchase any of the Global Family Reunion campaign perks on IndieGoGo, you can feel good knowing that all proceeds -- after covering the costs of the event -- go toward battling Alzheimer’s. The Alzheimer’s Association New York City and the Cure Alzheimer’s Fund are the official beneficiaries. The event’s founder, author A.J. Jacobs, watched his grandfather succumb to dementia, and this inspired A.J. to make the reunion about keeping family memories alive.

Visit the campaign page to find out how you can contribute and get involved.

Among the perks available in the Global Family Reunion crowdfunding campaign:

--Tickets to the reunion
--A gorgeous computer visualization of how you’re linked to your 20,000 closest relatives by an Israeli data specialist
--Signed copies of A.J.’s upcoming book about the quest to unite the world with DNA and family trees.
--A.J. will even dedicate the book to the first person who donates $10,000 to the Alzheimer’s benefit. (His wife will understand).

The Global Family Reunion believes that massive multi-national family trees serve their own great purpose. Scientists are studying the online mega-family trees to see how diseases and traits are passed from generation to generation. Genealogy has the potential to help us find many cures. The mega-trees – which now number in the millions – also spur students to become interested in history. If you’re related to Abe Lincoln, even if distantly, you’re more likely to want to learn about him.
And the big hope is, once we see that all humans are, in fact, part of the same family, we'll treat each other with a little more kindness. As cousin John Lennon said, you may call us dreamers, but we're not the only ones.

About the Global Family Reunion

The Global Family Reunion was founded by author A.J. Jacobs, who became fascinated with the idea that every person on Earth is related to every other after entering his name in several genealogy websites and finding he was connected to people all over the globe. “My hope — and I know it’s a bit idealistic — is that once we see how closely we’re all related, we’ll be able to work together better and solve the world’s really big problems, including Alzheimer’s,” he says.

The Global Family Reunion will be the topic of Jacobs’s next book. Among those participating are speakers Henry Louis Gates and Dr. Mehmet Oz, actor Daniel Radcliffe (live or via video), President George H.W. Bush (via video) and comedian Nick Kroll. The event has already been featured in the New York Times, People Magazine, NPR and “Good Morning America.”

If you are interested in attending, please see the event website at globalfamilyreunion.com for more information. Plus, take a few minutes and watch Jacobs’ TED talk The world’s largest family reunion…we’re all invited . 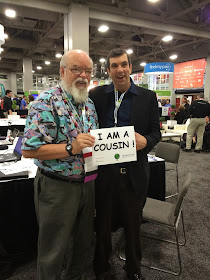 Geni.com tells me that he is my "9th cousin once removed's husband's nephew."  That's not exactly a cousin relationship - but it's an extended family relationship.

All is well, however, because Geni.com tells me that I'm descended from King David (yes, THAT King David) - I'm his 91st great-grandson (see Cousins, Kinship, AJ Jacobs and King David - posted 12 September 2014).  A.J. is the 114th great-grandson of King David according to Geni.com.  I can't account for the disparity.  If both of those descents are correct, then we are 92nd cousins 23 times removed.

I will make a contribution to a very worthy cause which has touched my family.