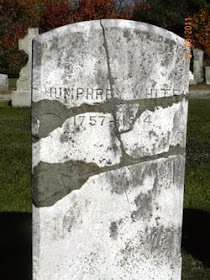 The biography and family information for Humphrey White is included in the article by Ruth Wilder Sherman, "Some Descendants of Jonathan White of Dartmouth MA and of Humphrey White of Glocester RI," The American Genealogist, Volume 56, Pages 113-118.[1]

Humphrey White was born in about 1757 in Westport, Massachusetts, the son of Jonathan and Abigail (Wing) White.  He is mentioned in the 1804 will of his father, Jonathan White.[1]

The Dartmouth, Massachusetts town record book has this marriage entry for Humphrey White and Sibel Kirby:[11,12]

On 11 April 1794, Humphry White purchased a 224 acre farm in Glocester, Rhode Island from John Pray for 1,080 pounds lawful money. This house at 751 Reynolds Road, on the west side of Route 94,  West Glocester, RI, is still standing.

On 3 December 1795, Humphrey White of Glocester, R.I., yeoman, sold 21 acres of land in Dartmouth, to Thomas Cornell and Peleg Cook for $230, with wife Sybil releasing her dower.[4]

Humphrey and Sibyl (Kirby) White had ten children born between 1787 and 1807, first in Dartmouth and then in Glocester.  At least nine of the ten married and outlived their father.

According to the inventory taken of the estate of Humphrey White, he died on 15 January 1814 in Glocester.[7,8]

The gravestone in Acotes Hill Cemetery in Glocester, Rhode Island has this inscription:[9]

Humphrey White of Glocester RI died intestate. There are three records of guardianship for his children, an inventory, and records for administration of his estate.[7,10]

a)  The guardianship record for four minor children is:

"Do by these presents, in the name of the State of Rhode Island & Providence Plantations, and by virtue of the law in said state, Empowering the Courts of Probate to appoint Guardians, when the Court thinks proper, over certain persons and their Estates, and we now think it proper, for the benefit of Rhoda White, Jonathan White, William White and Nancy White, all of said Glocester under lawfull age, and children of Humphrey White late of Glocester deceased.

"Therefore, we the said Court of Probate have, and do hereby appoint you Sibel White of said Glocester, and you are hereby appointed a proper and lawfull Guardian, over the persons and Estate of the said Rhoda, Jonathan, William and Nancy, with full power to do everything that is right and just according to Law, relating the duty of a Guardian respecting the aforesaid premises.

"We hereby relying on your strict justice and integrity in and about said premises, and that you hold yourself at all times ready to make and render a just and true account of all your doings, by virtue of the power herein given you unto the said children, & otherwise make and render such account in the premises as the Law in such cases made and provided doth direct, whenever legally called thereunto.  Given per order and in behalf of the said Court of Probate, with their seal hereunto affixed this 12th day of February A.D. 1814."

c)  The inventory was taken by Joseph Cady, David Arnold, and William Stone.  It is four pages long with double columns, and amounts to $2,568.89.  It was accepted, allowed and recorded on 16 March 1814.

"A true and proper inventory  of all the goods, chattels, rights and credits and personal estate that belonged to Humphrey White late of Glocester in the county of Providence and State of Rhode Island, at the time of his decease, who departed this life on the 15th day of January AD 1814.  That was set forth by the Administrators and apprised by us the subscribers on the 21st, 22d & 23d days of February AD 1814, viz:"

d)  On 15 March 1814, Sibel White and Benjamin White were appointed administrators of the estate of Humphrey White by the Court of Probate in Glocester.  They were given "...full power to ask for, gather, recover & receive, all and whatsoever goods, Chattels, Wares, Merchandise, rights, credits, effects and things and the whole personal estate whatever which to the said Humphrey White while he lived, and at the time of his death  did appertain and belong."

No record of the administrators account or the distribution of the personal estate was recorded in the Court of Probate.

7. Ruth Wilder Sherman, "Some Descendants of Jonathan White of Dartmouth MA and of Humphrey White of Glocester RI," The American Genealogist, Volume 56, page 115.