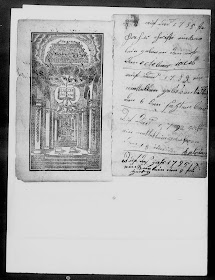 The only clues available for the name, birth date and birthplace of Maria Magdalena (Molly) Hoax are the Revolutionary War Pension file declaration in February 1839[1] which states that  she was age 71, the 1850 U.S. census record[2] which shows a Mary Caringer, aged 82 born in Maryland, living in the house of Henry Caringer, and the February 1851 declaration by her son, George Carringer[7], that provided her maiden surname as "Hoax" and her death date.  These records define Mary's birth year as 1767 or early 1768.  The only birthplace found in a record is Maryland from the 1850 U.S. Census record.

The god-parents of Mary's first child, Jacob Carringer, were Nicolaus and Barbara Hack (from German Church records of Westmoreland County, PA)[9] which may be a phonetic version of Hoax (or Houx?), just as Hoax may be a phonetic spelling of Hoaks or Hokes.

There was a Theodore Frederick Houx who had a son Mathias Houx born in 1759 in Frederick, Frederick County, Maryland.  Mary (Molly) may have been related to this Houx family.

There are many families with surnames like Hack, Houks, Hokes, Houx, Houcks, Hauck, Hough, Hout, Hoat, Hoax etc. in Pennsylvania and Maryland in the 1760-1790 time frame, and it may be impossible to determine Mary's ancestry without definitive land or probate records.  At the time of her marriage in 1785, she was probably a resident of Westmoreland County, Pennsylvania.

The family Bible included in the Revolutionary War Pension File summary for Martin Carringer included the note that " soldier married Mary "Molly" Hoax in May 1785."  This was probably in Westmoreland County, Pennsylvania.

Martin and Mary "Molly" (Hoax) Carringer had eight children who were listed in the Family Bible[8] as:

The first four children were baptized in the Lutheran Church in Westmoreland County, Pennsylvania[9].

Molly Carringer declared that she was a widow of Martin Carringer and requested a Revolutionary War pension in a declaration dated 6 February 1839[3].  The declaration says:

On the Sixth day of February
in the year of our Lord One thousand eight hundred
and thirty nine personally came before the subscriber
a Judge of the Court of Common Pleas in and
for said County being a Court of Record of Pennsyl-
vania, Molly Carringer a resident of Sandy
creek Township Mercer County and State aforesaid,
age Seventy one years who being first duly sworn
according to Law, doth on her oath make the
following declaration in order to obtain the ben-
efit of the pensions of the Act of Congress passed
July Seventh One thousand eight hundredand
thirty Eight entitled “An Act granting half
pay and pensions to certain Widows.”

Molly Carringer deposed on 8 February 1839 that the family Bible pages were written by Martin Carringer[4].  The record says:

"State of Pennsylvania
Mercer County Ss Eighth Feb'y A D 1839
Personally appeared before me the subscriber one of the Justices
of the peace in and for said County Molly Carringer the
Widow of Martin Carringer late of Sandycreek Township
in the County afforesaid Deceased, and sworn as the law directs
Deposeth and saith, that the leaves of the Book to which this
Deposition is attatched is the family Record of her Husband
the late Martin Carringer, and although she cannot read the
writeing thereon, she knows it to be her Husbands handwriting
and preserved it, Always in her own possession (until
attatched to this Deposition) as the date of birth of her
Children, And that the last name on the list was not their
Child but their Grandchild, and that She had a Certificate
of her Marrage but lost it.                   Her
Sworn to and subscribed             Molly X Carringer
before me the above date                 mark
Adam Thompson J.P.

This declarant states that he is the
lawful Child of Martin Carringer late of said County
who was a Revolutionary pensioner of the United States
under Act of 18 March 1818 at the rate of 96$ per annum and
who died in said county on the 25th day of January A D 1834.

This declarant further states that he is the lawful
child of Mary Carringer who was the lawful wife o& widow
of the aforesaid Martin Carringer that the maiden name of
this declarants Mother was Mary Hoax and that she the said
Mary was a pensioner of the United States at the rate of 80$
per annum and that the said Mary Carringer died in
said county on the thirty first (31) day of August in the year
eighteen hundred and fifty leaving Six children only
surviving her whose names are Jacob Carringer, Elizabeth
McCartney deceased on the 14th day of November in the year 1850,
Catherine Cazbe, George Carringer, Henry and Joseph Carringer.
Sworn and subscribed to
on the day and year first                            George Carringer
above written before me
Thomas Robinson J.P.

There is no known burial location for Maria Magdalena "Molly" (Hoax) Carringer.