Do I Have Enough Information to Join Society of Mayflower Descendants?

After I posted My Mayflower Connections - Soule, White, Warren, Cooke, Brewster, Hopkins and Fuller on Thanksgiving Day, I received an email message from my friend, Ray Raser, former Governor of the San Diego Colony of the Society of Mayflower Descendants, saying:

"You are invited to join the General Society of Mayflower Descendants.   It is required to only document one Mayflower ancestor and as you probably know the first five generations are already proven.   With your vast knowledge of genealogy our membership would certainly be beneficial to others."

I decided that I should look through the information I have and determine what I am missing in my White line.  I think that I need proof (a birth record, a marriage record, a death record) to document each parent-child and spousal relationship.  Failing that, a probate record, a baptism record, a land record, etc. might be useful.

Here is my line, and the documents that I have for my Mayflower line from William White (1590-1621) to myself - assuming that the first five generations are "proved" by the "Silver book" for William White.  Two published works are helpful for this analysis: 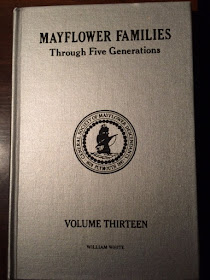 B)  Ruth Wilder Sherman, "Some Descendants of Jonathan White of Dartmouth MA and of Humphrey White of Glocester RI," The American Genealogist, Volume 56, Number 2 (April 1981), Pages 113-118. 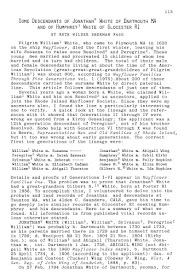 The documents by generation:

Assuming that the first six generations are covered by the Mayflower book, the problems I think that I have with documents for this line are:

Four of my Mayflower passengers go through the Henry White/Amy Oatley bottleneck and are not as well documented by me as this line is.

I'm a bit hampered by not having certain knowledge of the documentation requirements for the GSMD.  I doubt that I have enough documentation to join the Society at this time.  I may be wrong - I would appreciate any comments from my readers.