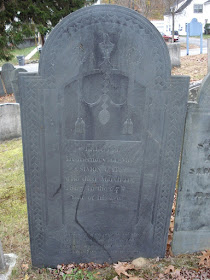 Simon Gates was born in about 1739, probably in Stow, Massachusetts, the son of Amos and Mary (Hubbard) Gates[1].  There is no birth record for Simon Gates in Stow, Massachusetts for Simon Gates.  In his military enlistment on 15 March 1759, , he was mentioned as a son of Amos Gates, with a residence of Stow.  In his enlistment on 26 February 1760, he was listed as 21 years of age[1].  This appears to be the only record that provides a birth year (about 1739) and a father's name.

Simon Gates served in the Crown Point expedition under Captain Abijah Hall from 15 May to 13 December 1759.   He served again from 4 March to 27 November 1760 under Captain Silas Brown in the campaign for the total reduction of Canada[1].

The History of Westminster, Massachusetts book by Heywood provides this short sketch of Simon Gates[2]:

"Simon Gates settled in what is now Gardner, Massachusetts after his marriage to Susannah Reed.  He bought lot number 26 in the 2nd division on 4 September 1765, situated just over the Westminster line, but did not locate on it until 1768.  When Gardner was incorporated in 1785, he was assigned to the new town at his own request, 'because he was most needed there.'  Another version of the story is that he was promised a deaconship in the church - a promise which was never kept and one perhaps 'more honored in the breach than in the observance.' He was the ancestor of most of the Gates descendants in Westminster, Gardner and vicinity."

The History of Gardner, Massachusetts by Glazier has a short sketch about Simon Gates[3]:

On 27 May 1766, Simon Gates married Susanna Reed in Marlborough, Massachusetts[5].  The marriage record in the Marlborough vital record book says:

On 11 April 1775, Simon Gates, yeoman of Westminster, bought 60 acres, with two acres saved for highways, of land in Westminster from David Wilder of Lancaster, gentleman, for 30 pounds[6].  The land was in lot number 27 in the second division, belonging to original lot 2013.

On 3 October 1779, Simon Gates, yeoman of Westminster, bought 30 acres of land in the northwesterly part of Westminster from Samuel Conant, Jr., yeoman of Stow, for 570 pounds of lawful money[16].  The land was in lot 121 in the third division.

On 27 February 1787, Simon Gates, yeoman of Gardner, bought 3 acres and 6 rods of meadow land in the easterly part of Gardner, from Ephraim Pratt, Jr., cordwainer of Gardner, for 9 pounds[8].  The parcel was in lot 72 of the third division.

The town records of Gardner indicate that Simon Gates, the wife of Susanna and father of Reuben and Ezekiel died 11 March 1809[12].  The record says:

"Simon Gates the father of the above children died March 11th 1809."

However, the administration of the estate of Simon Gates filed on 4 April 1703 by the widow Susanna Gates implies that he died before that date[14].  It is probable that the date in the town records should have been 11 March 1803 rather than 1809; his son Ezekiel died on 12 August 1809, and the entry for Simon may have been entered at that time.

The inscription on the gravestone of Simon Gates in the Old Burying Ground in Gardner says[15]:

Simon Gates of Gardner died intestate, and left a sizable estate[14].  The probate records can be found in Worcester County Probate Packet No. 23,252 at the Worcester County Courthouse in Worcester, Massachusetts.  The packet includes a letter of administration naming the widow, Susanna Gates, as administratrix on 6 April 1803.  A $10,000 bond was posted by Stephen Miles and Stephen Hoar, sureties.  An inventory was taken on 14 May 1803, in the sum of $5,636.17 by Stephen Miles, Stephen Hoar and Levi Fairbanks; the inventory was accepted by the Court on 19 May 1803.

A warrant of partition was issued to Aaron Wood, Matthias Mosman and Stephen Hoar on 7 September 1803.  Their report was filed and allowed on 17 May 1804.

The partition of the estate was very detailed and very complex, due to the large land holdings of Simon Gates.  The land included:

1)  The home farm in the northeastern part of Gardner, 98 acres and 23 rods of mowing, plowing, orcharding, pastureland and woodland, together with two dwelling houses, barn and other outbuildings.  The land was bounded southerly by Josiah Kendall, southeasterly by Josiah Kendall, a town way, Daniel How, and widow Ray, northerly by John Owens, and westerly by Edward Jackson.  This home farm was appraised at $2,525.

2)  30 acres of pasture and woodland, called the Conant lot, in the eastern part of Gardner, bounded northerly by a town road, westerly by John Pierce and William Chappel, southerly on fourth division land, and easterly by Edward Jackson.  This land was valued at $330.

3)  The Marshall lot in the southeastern part of Gardner, comprising 48 acres and 149 rods of mowing pasture and woodland, bounded northwesterly and southwesterly by David Read, southeasterly by Ephraim Pratt, John Pierce and Jabez Bigelow, and northeasterly by William Penniman.  This land was appraised at $490.

5)  A tract of 18 acres of swamp land in the northwestern part of Westminster, called the Coburn Swamp, appraised at $190.

7)  A pew in the galleries of the Gardner meeting house, valued at $27.

8)  A horse stable near the meeting house valued at $5.

The oldest child, Nathan Gates, had received the sum of $266.67 from his father, and was indebted to the estate by $747.04 principal and interest, totalling then $1,033.72.  By agreement with the other children and heirs of Simon Gates, Nathan Gates agreed to quitclaim any further real or personal estate of his father in return for being relieved of all demands from the estate.  Therefore, he was not considered to be part of the distribution of the remaining estate.

Elizabeth Gates was apportioned the other half of pew 15 in the Gardner meeting house ($22) and $484.13-1/3 to be paid by her brothers Simon and Daniel Gates.

Ezekiel Gates was apportioned $506.13-1/3, to be paid by his brothers Simon and Daniel Gates.

Simon and Daniel Gates were apportioned the other half of the dwelling house and the remainder of the home farm (98 acres plus), the two Fourth Division lots,  the Coburn Swamp land in Westminster, the gallery pew in the meeting house and one half of the horse stable. Their portion amounted to $2,018.66-1/3.  They were directed to pay their siblings the amounts listed above.

The personal estate was listed in a detailed inventory, and totalled $1,887.25.  Susanna Gates charged herself with this amount, and filed the account  listing the charges and debts paid to many people, totalling $1,287.62.  This left a balance of $599.63 to be distributed to the heirs.  She was granted her one third share ($199.88), and was directed to pay the other five children $79.95 each.

Receipts for their shares were signed by Simon Gates, Daniel Gates, Elizabeth Gates, and Merari Spaulding, the guardian of Ezekiel Gates and Reuben Gates.

2. William Sweetzer Heywood,  History of Westminster, Massachusetts:  (first named Narragansett no. 2) from the date of the original grant of the township to the present time, 1728-1893 ; with a biographic -genealogical register of its principal families  (Lowell, Mass. : Vox Populi Press, 1893), page Simon Gates sketch.