Yes, I know it's supposed to be Treasure Chest Thursday, but I can't help it - I want to share some of the goodies that Susanne shared with me - see A Kirby Family Genealogical Windfall From Susanne (17 March 2016).
Today's treasure is the 1777 record of payment by David Kirby for being drafted: 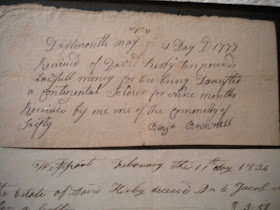 The transcription of the top paper is:

The source citation for this document is:

This document appears to indicate that David Kirby paid the Committee of Safety (probably in Dartmouth), Massachusetts) for being drafted, presumably into a Continental regiment during the Revolutionary War.

My suspicion is that he was paying the Committee of Safety to find a replacement for himself rather than serving for nine months.

Has any researcher seen a similar document or record?  Am I interpreting this document correctly?  How common was it for a drafted man to pay to find a replacement?