The subject today is the 1755 warrant and real estate division for the estate of Henry Smith (1680-1743) of Medfield, Sussex County, Massachusetts (starts near middle of left-hand page): 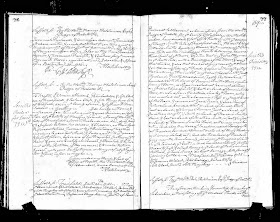 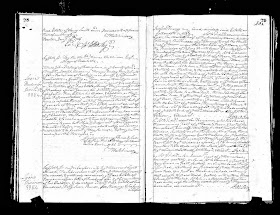 The transcription of the warrant and division is:

To Mess^rs Ephraim Wheelock, Peter Coolidge, & Seth Clark
all of Medfield, & Joshua Clap & Seth Kingsberry both
of Walpole, all in the County afores^d & Sufficient Free-
holders – Greeting _ I do hereby authorize &
impower you to make a just & equal Division, or Parti-
tion of the Estate of Housing, & Land, whereof Henry Smith
late of Medfield afores^d, Husbandman, dec^d dyed seized
& possessed between his Widow & Children, or their legal
Representatives pursuant to the Directions of his Will
according to your best Skill & Judgment (to w^ch you are
to be first Sworn before one of his Majesty's Justices of the
Peace) & you are to notify all Persons Interested to be pre-
sent at the Partition, if they see cause, & to make Return
hereof, with your Doings therein unto myself at the Regis-
ters Office, as soon as may be.
Given under my Hand & Seal of
Office at Boston, this Fourteenth Day
of November, Anno Domini 1755
T Hutchinson

Suffolf Ss: Medfield, Dec^r 21^th 1755 – Then
the above named Ephr^m Whelock, Peter Coolidge, Seth Clark, Joshua Clap
& Seth Kingsbery all appeared, & were Sworn according to the Direction of
the above Warrant – Before me Henry Adams, Just^ce of Peace.

Pursuant to Warrant or Commission from the Hon^ble
Judge of Probate for the County of Suffolk, We the Subs-
cribers have divided & Sett off to Ruth Smith the Widow
of Hemry Smith late of Medfield dec^d, the West End of
s^d Henry Smiths Dwelling House to the middle of the Chim-
ney, with all the Priviledges thereto belonging also one
thir part of the Barn, viz^t Ten Feet in the great Haymow
on the South Side with a Priviledge of the Floor & also the
West Lintow, & also that Orchard lying nearest the House
& on the same side of the Road, & also one Third part of
the Lands in the home Lot, on the West Side of s^d Lot partly
Plowland, partly Woodland, partly Pasture Land
bounded North on Land of Benoni Smith's Heirs, on a Line
from the Barn as it is now marked out to a marked Tree
on the West Line of s^d Lot & South on Land of Benoni Smith's
Heirs, on a Line from the outside Line to the Barn, as it is
now marked out, with a Convenient Pass on the west End
of the Barn & convenient Yard Room & also Piece of
Pasture Land bounded West on Land of Samuel Clark,
part on Land of Samuel Turner, part on Land of
Jonathan Wight & South on Land of Benoni Smiths
Heirs & East on land of Jonathan Smith, in part, & in part
on Land of Benoni Smith's Heirs, as it is now marked
out. And also, One acre of Meadow, called Bridge Str-
eet Meadow bounded Northwest on Land of Henry Harding
as it is now staked out. And also three Acres of Meadow
lying near the Pine Swamp joining on the Meadow of Sam^ll
Smith towards the East. And we allow Liberty for the
Widow to pass & repass through the Land of Benoni Smit-
hs Heirs, where it will do least Damage, both for carts
& driving Cattle. – Medfield Dec^r the 24^th day 1755
Ephraim Whelock, Peter Coolidge, Joshua Clap & }
Seth Clark, Jyn^r, Seth Kingsbery } Dividers

This is actually the second division of the widow's real estate in 1755.  Last week's blog post was a warrant to set off the widow's portion was written in February 1755, and executed.  Now, in November, another warrant for the same task was issued and executed.  The subscribers were different men.  Perhaps the first division was not acceptable to all parties.  One of the sons of Henry Smith, Benoni Smith, died in 1752.  His heirs may have objected to the first division.  There are no other papers in the probate court clerk records to provide more information.

Last week, I mentioned that the widow of Henry Smith, Ruth Smith who died in 1761, may have had a probate record because she owned the lands set out above.  I found no indication of a probate file for Ruth Smith in the Suffolk county, Massachusetts probate court estate indexes.

The earlier blog posts for the probate records of Henry Smith include: