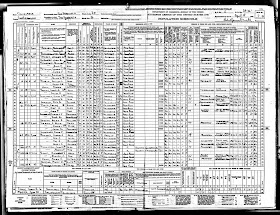 The Blair Mertes household at 46 Rivoli Street in the 25th Ward of San Francisco:

The extracted information for this household:

Edna C. (McKnew) Schaffner is my wife's maternal grandmother, and the mother of Muriel Jean (Schaffner) Mertes.  The Blair Mertes family resided with Edna Schaffner for the rest of her life.  Jean M. Mertes is my wife's first cousin.   Edna's husband, Paul C. Schaffner, died in 1934.  The census record indicates that Blair Mertes owned the house.  I don't think that is correct but I don't know for sure.

The family resided in 46 Rivoli Street in the Haight-Ashbury section of San Francisco.  My wife has many fond memories of the house and visiting her grandmother, aunt, uncle and cousin over her childhood and teenage years.