I received 7 new cousin relationships on the We're Related mobile app over the last week, which is based on Ancestry Member Trees.  The new relationships, and my initial evaluation of them, are: 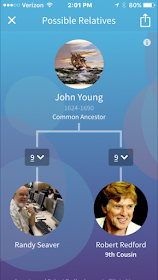 My line back to John Young goes through his son, John Young (1649-1718).  Robert's line goes through David Young (1682-1776), and there are many AMTs that say he was born in Donegal, Ireland and married Martha Boyd and died in Worceste, Mass..  My John Young had a brother David Young (1662-1745) who married an Anna Doane and died in Eastham, Mass.  My judgment is that the Ancestry app has conflated two different David Youngs born 20 years apart here.  My judgment is that this relationship is Unlikely. 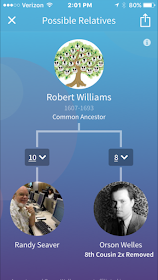 My line to Robert Williams goes through his purported daughter, Elizabeth --?-- (1620-1664), who married Richard Cutter of Cambridge, Mass.  Orson's line goes from Robert Williams to Isaac Williams (1638-1707).  I don't know Elizabeth --?--'s parents names yet, but Ancestry thinks it does.  There are well documented AMTs for the Isaac Williams parents and descendants.  My judgment is that this relationship is Unlikely. 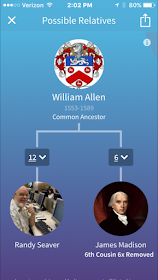 My line back to William Allen goes through 5 known generations of Allens, but I don't have a William Allen in England as a father of my George Allen (1585-1648) of Massachusetts.  President Madison's line goes from William Allen's daughter Eleanor to Peter Montague.  There are over 13,000 AMTs with Peter's granddaughter, but of the 10 I checked (with the most sources), none of them went back to William Allen.  My judgment is that this relationship is Unlikely.

My line to Thomas Nichols is through his 2nd great-granddaughter, Jerusha --?-- (1750-1817), his first great-grandson Joseph Chandler, his granddaughter, Mary Tucker (1697-????) and her purported father, Ebenezer Nichols (1664-1735), son of Thomas Nichols.  My known line ends with Jerusha --?-- who may have been a Chandler before she married Burgess Metcalf.  Also, how does a man named Ebenezer Nichols have a daughter named Mary Tucker?  Again, Ancestry has added five generations to my known tree here.  I can't judge Barbara's line without seeing more details.  My judgment is that my line on the app is Wrong, and therefore this relationship is Wrong.

My line back to John Morrison is through his daughter, Martha Morrison (1739-????), but I don't know her father's first name or her mother's name.  Barry's line is through David Morrison (1742-1807), who I don't have in my database.  There are AMTs with David's parents as John and Margrete Morrison, but there is a problem with some of the dates in Barry's line - Isaac Morrison's wife, Elizabeth Haycraft (1791-1868) would be 13 when she had June Mary Morrison (1804-1831).  My judgment is that this relationship is Possible.

My count is up to 197 famous or Facebook cousins provided by the app.  This week, my judgment is that only 1 of the 7 cousin relationships are Likely or better.

I will say it again:  My biggest problem with this We're Related app is that it thinks it knows my ancestral lines better than I do, and adds one to five generations to some of my end-of-line ancestors.  The second biggest problem is that many of the lines of the famous or Facebook persons have colonial lines that have same name, different place problems.

The app may be right -- I don't know for sure -- and I can't really find out because the app provides no source material to back up their assertions.  If there was authoritative information for my end-of-line ancestors, I would add it.  None of the "Unlikely" or "Wrong" relationships have been convincing to me yet.