I have been trying to work out relationships with several of my AncestryDNA matches using my family tree and what I can see in their family trees.

1) I did not have this Mary Richman in my family tree yet, but I had seen her in the 1851 England and Wales census residing in Hilperton with her grandparents, John and Ann (Marshman) Richman.  Here is the 1851 census record from Findmypast: 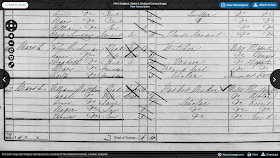 The transcription information for the family in 1851: 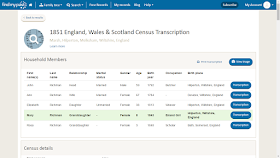 Mary is listed as age 8, born in Hilperton, and a granddaughter to the head of household.  John and Ann (Marshman) Richman had 8 children, including two Marys born in 1823 and 1825, who died in 1825 and 1825 respectively.  I searched in the family lines for all of their children, but did not find a Mary.  Was she the daughter of either of the two sons who married and had children?  Or was she the daughter of one of the unmarried daughters of John and Ann Richman?  Such as the daughter Elizabeth in the 1851 census, who married Thomas Hogan in 1862?  I didn't know, and over time I forgot about this Mary Richman age 8 in the 1851 census.

2)  I went looking for Mary Richman in the 1861 England and Wales census on Findmypast, and found her (I think) in the family of John and Maria (Matthews) Richman in Hilperton, listed as age 18, a daughter.  John Richman (1819-1884) is a son of John and Ann (Marshman) Richman, and the only son married before 1844.  Here is the 1861 England and Wales census record for the John and Maria (Matthews) Richman household in Hilperton: 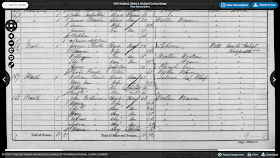 Here is the 1861 census transcription page: 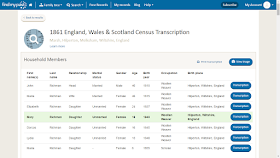 So this is (I think) the same person in the 1851 and 1861 census records, and the relationships given are consistent with information in the records.  The Civil Registration in 4th quarter of 1842 have a birth for a Mary Richman, but no parents are listed in the online record.

So I added this Mary Richman to my tree as a daughter of John and Maria (Matthews) Richman of Hilperton.

3)  When I looked at my family tree before I started this rabbit hole experience, I saw immediately that John and Maria (Matthews) Richman had a daughter, Maria Richman, born in 1855, who is in the 1861 census age 6.  She married William Henry Hanny in 1877, and they had a large family born in Bradford on Avon in Wiltshire.

5)  I'm perusing LR's tree, and also the FamilySearch Family Tree, and will add the children of Mary Richman to my tree so that I can determine my relationship to LR.  I think that we are probably 4th cousins once removed.  John and Ann (Marshman) Richman are my third great-grandparents, but they are LR's 4th great-grandparents.  We share only 6.7 cM in 1 segment according to AncestryDNA, which is almost exactly the average for 4th cousins once removed.