It's Treasure Chest Thursday - a chance to look in my digital image files to see what treasures I can find for my family history and genealogy musings.


The treasure today is the 1706 marriage record of Thomas Dill and Mary Pierce in Woburn, Massachusetts: 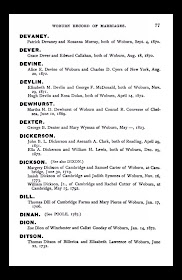 The 1706 marriage record for Thomas Dill and Mary Pierce:

The transcription of the marriage record is: