Seavers in the News -- 1923 Obituary for Charles L. Seaver

It's time for another edition of "Seavers in the News" - a semi-regular feature from the historical newspapers about persons with the surname Seaver that are interesting, useful, fun, macabre, or add information to my family tree database.

This week's entry is from the The Whitesville [N.Y.] News newspaper dated Thursday, 4 October 1923: 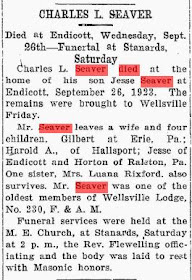 The transcription of this obituary is:

"Charles L. Seaver died at the home of his son Jesse Seaver at Endicott, September 26, 1923.  The remains were brought to Wellsville Friday.

"Mr. Seaver leaves a wife and four children.  Gilbert at Erie, Pa.; Harold A., of Hallsport; Jesse of Endicott and Horton of Ralston, Pa.  One sister, Mrs. Luana Rixford, also survives.  Mr. Seaver was one of the oldest members of Wellsville Lodge, No. 230, F & A.M.

"Funeral services were held at the M.E. Church, at Stanards, Saturday at 2 p.m., the Rev. Flewelling officiating and the body was laid to rest with Masonic honors."