"The Wreck of the Hesperus" by Henry Wadsworth Longfellow

Bill West has an annual "Great Genealogy Poetry Challenge" on his West in New England blog, and wants historical poems that may relate to a person's ancestry or heritage.

I have never participated in this, but decided to look for a poem that could be appropriate.  I found one:


The Wreck of the Hesperus - by Henry Wadsworth Longfellow 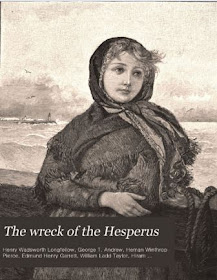 It was the schooner Hesperus
That sailed the wintry sea;
And the skipper had taken his little daughter
To bear him company.

Blue were her eyes as the fairy-flax,
Her cheeks like the dawn of day,
And her bosom white as the hawthorn buds
That ope in the month of May.

The skipper he stood beside the helm,
His pipe was in his mouth,
And he watched how the veering flaw did blow
The smoke now west, now south.

Then up and spake an old sailor,
Had sailed to the Spanish Main,
"I pray thee, put into yonder port,
For I fear a hurricane.

"Last night the moon had a golden ring,
And to-night no moon we see!"
The skipper he blew a whiff from his pipe,
And a scornful laugh laughed he.

Colder and louder blew the wind,
A gale from the north-east;
The snow fell hissing in the brine,
And the billows frothed like yeast.

Down came the storm, and smote amain
The vessel in its strength;
She shuddered and paused, like a frighted steed,
Then leaped her cable's length.

"Come hither! come hither, my little daughter,
And do not tremble so;
For I can weather the roughest gale,
That ever wind did blow."

He wrapped her warm in his seaman's coat,
Against the stinging blast;
He cut a rope from a broken spar,
And bound her to the mast.

"O father! I hear the sound of guns;
O say, what may it be?"--
"Some ship in distress, that cannot live
In such an angry sea!"

"O father! I see a gleaming light;
O say, what may it be?"
But the father answered never a word,--
A frozen corpse was he.

Lashed to the helm, all stiff and stark.
With his face turned to the skies.
The lantern gleamed through the gleaming snow
On his fixed and glassy eyes.

Then the maiden clasped her hands and prayed
That saved she might be;
And she thought of Christ, who stilled the wave,
On the Lake of Galilee.

And fast through the midnight dark and drear,
Through the whistling sleet and snow,
Like a sheeted ghost, the vessel swept
Towards the reef of Norman's Woe.

And ever the fitful gusts between,
A sound came from the land;
It was the sound of the trampling surf,
On the rocks and the hard sea-sand,

The breakers were right beneath her bows,
She drifted a dreary wreck,
And a whooping billow swept the crew
Like icicles from her deck.

She struck where the white and fleecy waves
Looked soft as carded wool;
But the cruel rocks, they gored her side
Like the horns of an angry bull.

Her rattling shrouds, all sheathed in ice,
With the masts went by the board;
Like a vessel of glass, she strove and sank,
Ho! ho! the breakers roared.

At daybreak, on the bleak sea-beach,
A fisherman stood aghast,
To see the form of a maiden fair,
Lashed close to a drifting mast.

The salt sea was frozen on her breast,
The salt tears in her eyes;
And he saw her hair, like the brown sea-weed,
On the billows fall and rise.

Such was the wreck of the Hesperus,
In the midnight and the snow!
Christ save us all from a death like this,
On the reef of Norman's Woe!

Read the book - it has pictures!

The source citation is:

Norman's Woe, according to the website "Poetry of Places in Essex County," was named for:

"The rock and reef of Norman’s Woe are a short distance from the westernmost point of Gloucester’s outer harbor. Norman’s Woe can best be seen from Hammond Castle on Hesperus Ave., off route 127 in Gloucester.

"There is no clear record of how Norman’s Woe got its name. Tradition tells that a man named Norman was shipwrecked and lost there, and it is for him the rock and reef are named. John J. Babson’s history of Gloucester notes that Goodman Norman and his son settled the headland near the islet.

"The history of uninhabited Norman’s Woe is the history of its many shipwrecks. One noted shipwreck was of the 'Rebecca Ann' in March, 1823. In a snowstorm, all ten crewmembers were swept out to sea, and one survived by holding on to a rock in the water. Perhaps the most famous shipwreck at Norman’s Woe was of the schooner 'Favorite' out of Wiscasset, Maine, in December 1839. Twenty bodies washed ashore, among them that of an older woman lashed to a piece of the ship. Poet Henry Wadsworth Longfellow took that story and named the ship 'Hesperus' after a wreck near Boston in creating the legend of 'The Wreck of the Hesperus,' the most famous 'shipwreck' associated with Norman’s Woe."

My connection to Norman's Woe is through my 9th grandfather Richard Norman (1580-1653), his son Richard Norman (1623-1683), and his son John Norman (1660-1709).  They were fishermen and shipwrights and settled near Cape Ann in the 1620's as part of the Dorchester Company, and then resided in Salem and Marblehead.   One is are probably the "Goodman Norman" in the description above.  My guess is that they foundered several times on the rocks but survived the experience.