t's Treasure Chest Thursday - a chance to look in my digital image files to see what treasures I can find for my family history and genealogy musings.


The treasure today is the 1760 death records of Jabez and Elizabeth Snow in Eastham, Massachusetts: 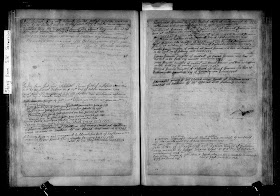 The death records are on the left-hand page on the image above, about two thirds down the  page:

The transcription of these records is:

This record set is an original record book with the records of Eastham families grouped together.  Below the marriage record, and above the death records, are the birth records for the children of Jabez and Elisabeth (Paine) Snow.   Several of the Eastham record books recorded families rather than individual events in chronological order.  As such, this is an image of an Original Source record, with Primary Information and Direct Evidence for the deaths of Jabez and Elisabeth (Paine) Snow.