The end is nigh.  All that's left is the DearMYRTLE after-party and the flight home.  And maybe some snow overnight.

I managed to get less than 6 hours sleep last night after the MyHeritage party, and was awake for good at 5:15 a.m.  I got up at 6:15 and left at 6:45 a.m. to attend the MyHeritage Friends breakfast.  I sat with Roberta and I forget who else besides a MyHeritage guy.  Daniel Horowitz told us more about MyHeritage Friends, we filled out a Friends survey, and had a non-protein breakfast.  I had pastries and fruit with orange juice.  After Daniel's talk, we discussed MyHeritage announcements and what it all means to us.

After hustling back to the hotel, I added to the blog compendium and then watched most of the Keynote address.  The SAncestryDNA psrt was uninspiring - Ken Chahine heaped glory on himself for satisfying his 2014 predictions instead of highlighting coming features.  The next segment was singer Natalie Lafourcade who sang three songs and described her family life, and then FamilySearch provided more information about her heritage.  Her father's line was French instead of Spanish - makes sense now!  Then it was Henry Louis Gates, Jr. who described his genealogy journey and how he developed his PBS genealogy series.  I missed the end of his talk and CeCe Moore's segment about DNA so sill catch them later at home.

I got to the Expo Hall before 10 a.m., and set up in the Media Hub.  I was greeted by Jessica Dalley Taylor, the CEO of Legacy Tree Genealogists, who was crafting balloon figures for the thousands of kids visiting the Expo Hall today. 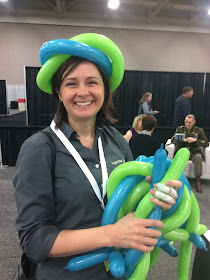 I managed to catch Thomas MacEntee wearing his tiara along with Hilary Gadsby at the blogger table looking at Hillary's photos: 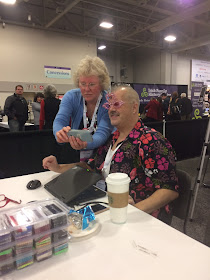 While walking around the Expo Hall, I was asked to place color stickers on the American Ancestor world map to show where my ancestors came from.  I only did my 2nd great-grandparents and later. 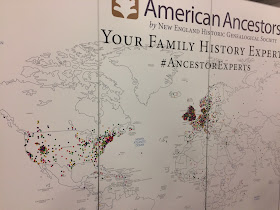 4)  Dr. Henry Louis Gates, Jr. came to the Media Hub for interviews and was there for quite awhile.  Here is Gates being interviewed by the FamilySearch video team: 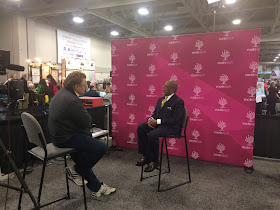 6)  Here are all of the other folks waiting to speak to Dr. Gates: 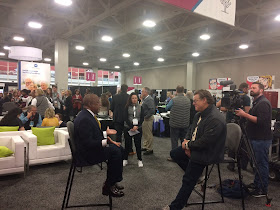 At 11:45 a.m. I went and picked up Linda at the hotel and we went to lunch with Dallan Quass, the founder of the RootsFinder online family tree program.  We talked about the state of the industry and things I learned this week, plus his experiences in the industry.  I forgot to get a photo of him.  Sorry, Dallan.

I finally made contact with my AncestryDNA Match badge locale, and met her at the AncestryDNA booth in the main hallway.  We each got a prize.  I chose a USB night light for my computer.

At 2 p.m. I showed up over in the Marriott Hotel for a discussion of the state of the industry with the MyHeritage CEO, Gilad Japhet.  I didn't get a photo of that either.

Back to the Media Hub at 3 p.m., and I wrote a blog post, and then recalled that I had not talked to author Nathan Dylan Goodwin who writes the Morton Farrier genealogy mystery books.  So I found his exhibit and was happy to hear that he sold out of four of the books he brought with him.  . Here is a selfie with Nathan: 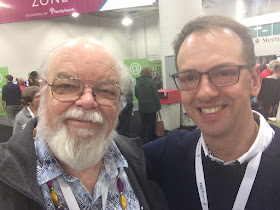 And here is Nathan in his exhibit with the available books on the table: 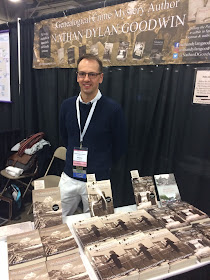 I was back to the hotel by 4:15 p.m. to write this post and update the RootsTech blog compendium post.  Maybe I can catch a nap.

Then it's off to DearMYRTLE's after-party at 6:30 p.m.   I will post photos from that sometime soon (not tonight!).