I subscribed to Newspapers.com last week, and have been searching for my ancestors in the collection of over 8,600 newspapers and almost 390 million newspaper pages.

My typical search is to use a name, a place (state or city) and a year range for the ancestor of interest.  For instance, I used:

I had over 1,500 matches with this search (not all were for my Devier J. Smith, but the ones at the top of the match list were!): 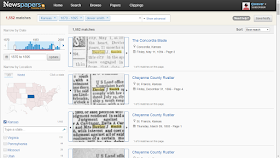 The first match was an obituary for Devier J. Smith from the Concordia [Kansas] Blade newspaper, dated 11 May 1894: 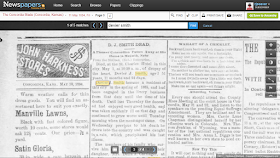 I used the Windows Snipping Tool to capture the article in two parts: 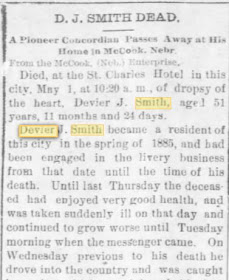 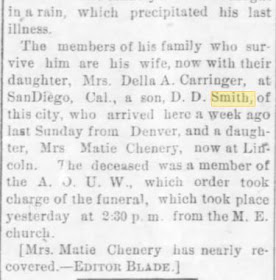 "Devier J. smith became a resident of this city in the spring of 1885, and had been engaged in the livery business from that date until the time of his death.  Until last Thursday the deceased had enjoyed very good health, and was taken suddenly ill on that day and continued to grow worse until Tuesday morning when the messenger came.  On Wednesday previous to his death he drove into the country and was caught in a rain, which precipitated his last illness.

"The members of his family who survive him are his wife, now with their daughter, Mrs. Della A. Carringer, at San Diego, Cal., a son D.D. Smith, of this city, who arrived here a week ago last Sunday from Denver, and a daughter, Mrs. Matie Chenery, now at Lincoln.  The dec eased was a member of the A.O.U.W, which order took charge of the funeral, which took place yersterday at 2:30 p.m. from the M.E. church.

There are hundreds of articles about Devier J. (or D.J.) Smith in Kansas and Nebraska.  D.J.'s family resided in Concordia, Kansas from about 1873 to 1885, and Newspapers.com has several Concordia newspapers.  They lived in McCook, Nebraska from 1885 to 1894, but obtained and owned property in Cheyenne County, Kansas, and Newspapers.com has several newspapers from that county.

A user of Newspapers.com can download (click "Save") the entire page with an article of interest as a JPG or PDF.  I chose JPG, and the file size was 3.3 mB.

A user can also "Clip" the article of interest, and that had to be saved as a PDF (file size 164 kb), shown below:

That system works pretty well, but the print quality depends on the original newspaper and the size of the clipping file.

I had an obituary for Devier J. Smith from another newspaper service with another McCook newspaper which did not have some of the detail in the article above, especially the names and location of his children.

Devier J. Smith is my second great-grandfather, and I am descended through his daughter Della A. (Smith) Carringer.