Guest Post: If You Don't Look at the Original Record, You're Missing Out!

This guest post is by my SDGS colleague, Marshall Clow:

You've heard it before - always read the actual record. You never know what might be there.
Do you always do this? I don't; al though I do try to at least glance at all of them.

I am becoming convinced that you should ALWAYS do so, and this record was a large part of the reason.

Sarah Illingworth is (probably) my wife's 5th great-grandmother. She was born in 1777, in Yorkshire, England.

I found her baptism record on Ancestry; the summary that Ancestry provided looked like this: 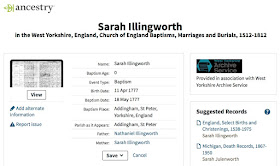 It has a birth date, a baptism date (and place), and a father's name and a mother's married name.

Too bad it has the mother's married name, but you can't have everything - right?

Let's look at the actual entry.

The register book is broken down into columns, with headings.

Marshall says: *Second*? I didn't know there was another (older) daughter. Now I need to research her.

Heading: Father's name, Profession, and Abode
Entry: Nathaniel Illingworth of Moorside, son of William Illingworth of Thos Illingworth Husbandman, by Mary his wife at Moorside in the Parish of Addingham.

Heading: Mother's name, and Descent
Entry: Sarah Daughter of William Hardisty of Westend in the Parish of Fewston Farmer, by Sarah D of Jonathan Walker of Sedgwich in Northergate, Farmer

That's just A BIT more than what was in Ancestry's records.

Let's enumerate all the people mentioned here, and their relationships.

Not too shabby for one record.

BTW, in the same church, two years later, was the baptism of "Thomas Illingworth, second son" - so there are (at least) two boys here as well!