Seavers in the News -- App Purcell Seaver Dies in 1961 in Gate City, Virginia

This week's entry is from the Kingsport [Tenn.] Times-News newspaper dated 12 March 1961: 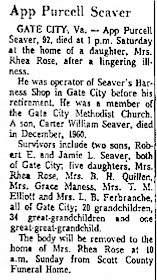 "He was operator of Seaver's Harness Shop in Gate City before his retirement.  He was a member of the Gate City Methodist Church.  A son, Carter William Seaver, died in December, 1960.

"The body will be removed to the home of Mrs. Rhea Rose at 10 a.m. Sunday from Scott County Funeral Home."

The source citation for the article is:

No age, birth date or birth place was provided for App Purcell Seaver.  A death date of 11 March 1961 can be inferred from the obituary (Saturday, presumably the day before the obituary appeared in the newspaper).  The real prize here are the names of the eight children, but only two of the daughters has a first name listed (unless "Rhea" is a husband's name!).

I did not have spouse names for Ethel, Grace, Garnet, or Jamie.   On Find A Grave, I found most of these children buried in Holston View Cemetery in Weber City, Virginia.  Ethel R. is Ethel Rhea Seaver Rose, wife of Frank R. Rose; Grace's husband is Richard S. Maness; Garnet's spouse is Paris  M. Elliott.

I am not related to this group of Seaver persons.  The earliest Seaver in this group is Casper Seaver (1720-1752) who was born in Germany.

Disclosure:  I have a paid subscription to Newspapers.com and have used it extensively to find articles about my ancestral and one-name families.