This week's entry is from the Washington [D.C.] Times newspaper dated 14 February 1921: 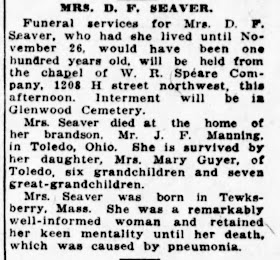 Funeral services for Mrs. D.F. Seaver, who had she lived until November 26, would have been one hundred years old, will be held from the chapel of W.R. Speare Company, 1208 H street northwest, this afternoon.  Interment will be in Glenwood Cemetery.

Mrs. Seaver died at the home of her brandson, Mr. J.F. Manning, in Toledo, Ohio.  She is survived by her daughter, Mrs. Mary Guyer, of Toledo, six grandchildren, and seven great-grandchildren.

Mrs. Seaver was born in Tewksbury, Mass. She was a remarkably well-informed woman and retained her keen mentality until her death, which was caused by pneumonia.

The source citation for the article is:

This short obituary doesn't tell us tMrs. Seaver's first name, but does indicate her husband was probable D.F. Seaver.  It doesn't tell us her death date, but it is certainly before 14 February 1921, and the death occurred in Toledo, Ohio.  It does tell us, indirectly, that her birth date was 26 November 1821.  It tells us that she will be buried in Glenwood Cemetery in Washington, D.C.  It tells us the name of a daughter and a grandson, which will probably be helpful.

The challenge here is to identify this person using the clues at hand.  I decided not to consult my RootsMagic family tree database unless the other clues don't pan out.  So I'm going to look in Glenwood Cemetery on Find A Grave first: 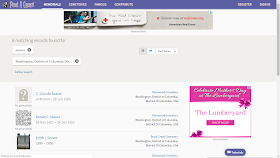 Interesting.  Dessie F. Seaver is the third name on the list of six Seaver persons in this cemetery on Find A Grave.  So I was wrong about her husband's name.  Here is the Find A Grave memorial for her: 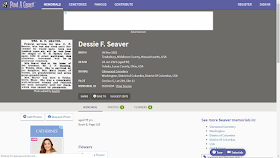 Unfortunately, no family members are listed.  The obituary is an image, and the memorial includes the birth and death information, so now I have a death date - 24 January 1921.

A census record might define her husband's name - I will try the U.S. Census records on Ancestry.com.  I had absolutely no luck or skill finding a Dessie Seaver, or any Seaver (with variations) born in 1821 in Massachusetts in Washington, D.C.

Plan C is to search my RootsMagic file for a Dessie.  I found one, but not married to a Seaver.  What more formal first name would have a nickname of Dessie?

So "Mrs. D.F. Seaver" was Desire French (Simons) Seaver - a female, and a widow for 68 years at her death, who would normally be named as Mrs. Desire Seaver in the society columns of the 1920s, but was referred to as "Mrs. D.F." in this particular obituary.

That was more difficult than I thought it would be.  Sometimes you have to use more than one clue!

Disclosure:  I have a paid subscription to Newspapers.com and have used it extensively to find articles about my ancestral and one-name families.