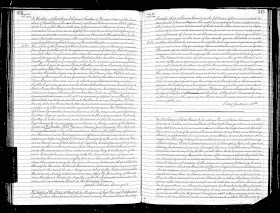 4)  NOTES (with source citations as indicated in brackets):
The book Colonial Families of Long Island, New York and Connecticut: being the ancestry & kindred of Herbert Furman Seversmith includes information about the Jonathan Lewis family[1]:

Jonathan Lewis and his family moved from Southold to Staten Island in about 1753.[1]

Jonathan Lewis was bequeathed half the money received for the sale of his father's lands when his father died in 1764.  The will of Jonathan Lewis (1688-1764) includes this[2]:

"Item my Will is and I do order that all my Lands Meadows and Real estate which I have in this County of Richmond shall be sold in some convenient time after my Decease at the discretion of my Executors give and Granting unto my Executors full power and Authority to give and Execute a title for the same and half of the money arising by such Sale of my Lands as aforesaid I give to my Son Jonathan Lewis his heirs and Assigns. "

Apparently, Jonathan Lewis bought some of the lands of his father, since the mills and farms were advertised for sale by his estate after his death in 1786.

Jonathan wrote his will on 28 November 1785, and it is in the New York Surrogates Court records for New York County[3].  The will names his wife and children:

"In the Name of God Amen. I Jonathan Lewis of Staten Island in the County of Richmond and State of New York being sick and weak of body but of sound mind and memory thanks be given unto God for the same calling to mind the mortality of my body and knowing that it is appointed for all men once to die do make ordain and appoint this my last will and testament in manner following (that is to say) First I Commit my soul to Almighty God who gave it hoping for pardon of my sins through the merits of Christ my blessed redeemer and my body to the earth there to be buried in such de-cent manner as my Executors herein after named shall think fit and as touching such worldly estate wherewith it hat pleased God to bless me I dispose of the same in manner following. I will and ordain that my Executors of this my last will and testament shall dispose of all my goods & Chattels, lands, mills and tenements at any time or times and in such parts and parcels as they in their discretion shall think fit within the term of two years after my deceased except such articles as shall herein after bequeathed or otherwise disposed of. And I do by these presents give grant will and transfer to my said Executors full power and authority to grant bargain sell alien convey and con-firm all my lands, mills, and tenements within the County of Richmond aforesaid to any person or persons and their heirs and assigns forever in fee simple to by all and every such lawful ways & means in the law as to my ^said^ Executors or their Council learned in the law shall seem fit or necessary.

"Imprimis I give bequeath and demise to my dearly beloved wife Mary Lewis my best horse and riding Chair two of my best Cows of her own Choosing with sufficient of my household furniture to furnish one room together with the sum of one hundred pounds lawful money of the State aforesaid to be first taken and levyed out of my estate and that in lieu of her dowry or power of thirds in or upon my estate I Likewise will and order that my beloved wife Mary Lewis shall have the use of my Negro wench and the yearly interest of the sum of fifty pounds during her life or the time she shall remain my widow. I will and order that my Executors do make use of the sum of ten pounds of my estate for the further education of my son Joseph Lewis. I will and order that after my just debts funeral Charges and the above mentioned dowry and legacy are paid and legally discharged that the remainder of my estate be divided among my Children in manner following (that is to say)

"Item I give bequeath and demise to my son James Lewis his heirs and assigns forever the one eighth part of my estate.

"Item I give bequeath and demise to my son Israel Lewis his heirs and assigns forever the one eighth part of my estate.

"Item I give bequeath and demise to my son Joseph Lewis his heirs and assigns forever the one eight part of my estate.

"Item I give bequeath and demise to my daughter Sarah Degroot her heirs and assigns forever the one sixteenth part of my estate.

"Item I give bequeath and demise to my daughter Catharine Hutchinson her heirs and assigns forever the one sixteenth part of my estate.

"Item I give bequeath and demise to my daughter Mary Lewis her heirs and assigns forever the one sixteenth part of my estate.

"Item I give bequeath and demise to my daughter Francis Lewis her heirs and assigns forever the one sixteenth part of my estate.

"Item I give bequeath and demise to my daughter Elizabeth Lewis her heirs and assigns forever the one sixteenth part of my estate.

"Item I give bequeath and demise to my daughter Phebe Lewis her heirs and assigns forever the one sixteenth part of my estate.

"I will and order that my Executors ^do^ pay none of the legacies above mentioned to any of my Children until they have arrived to the full age of twenty one years but at any time the Executors shall have any money on hand being part of my estate and shall think proper to make a dividend thereof amongst those of my Children that are of the abovementioned age those of them that are under that age shall have the Interest of such their dividend paid yearly towards their support until they arrive to full age to receive such dividend or their full legacy. I like wise will and order that if any of my Children should die underage or without issue and not having received their legacy that such their part dividend or legacy shall be divided among my surviving Children their heirs and assigns as above directed.

"I Likewise recommend to my Executors that they at the time of the sale of my houses and lands do reserve such part or parcel of my houses or lands or house and land as they in their discretion shall think convenient for the reception and continuing of my family together during the life or widowhood of my beloved wife Mary Lewis and after her decease or discontinuance of widow-hood such house and land so reserved (if any be) shall be sold as also my Negro wench and the money arising therefrom be divided among my Children in manner and form aforesaid.

"Signed sealed published pronounced and declared by the said Jonathan Lewis as his last will and testament in the presence of us who in his presence and in the presence of each other have hereunto subscribed our names,
John Latourette
Abraham Vail
Edward Hall"

The will of Jonathan Lewis was proved on 5 January 1786 in Richmond County[3]:

" ss: Be it Remembered that on the fifth day of January in the year of our Lord one thousand seven hundred and eight-six personally came and appeared before me Adrian Bancker Surrogate of the said County Abraham Vail of the said County Weaver and Edward Hall of the said County Schoolmaster and being duly affirmed and sworn the said Abraham Vail on his affirmation and the said Edward Hall on his oath declared that they did see the said Jonathan Lewis sign and seal the above written instrument purporting to be the will of the said Jonathan Lewis bearing date the twenty eight day of October in the year of our Lord one thousand seven hundred and eighty five and heard him publish and declare the same as and for his last will and testament, that at the time thereof he the said Jonathan Lewis was of sound disposing mind and memory to the best of the knowledge and belief of them the affirmant and Deponent and that John Latourette together with the affirmant and Deponent subscribed the said will as witnesses thereto in the Testator Presence.
Adrian Bancker Surrogate"

A newspaper advertisement in the Loudon's New-York Packet newspaper, dated 30 January 1786, describes an attempted sale of the estate of Jonathan Lewis[4]:

"To be Sold, at Public Vendue

"On Monday, the 20th day of March next, on the premises (if not disposed of before at private sale,)

"The valuable MILLS, with the lot of ground and meadow adjoining the farm; containing about forty acres.  There are on the premises a good dwelling-house, barn and out-houses, belonging to the estate of Jonathan Lewis, deceased, and commonly known by the name of Beadle's Mills, situated on Staten-Island, near Richmond town. -- As this place is well calculated for a store-keeper, and many advantages arising from the situation, any person inclining to purchase, may know both situation and terms of sale, by applying to Mr. Abraham Bond, in New-York, near the White-Hall, or to the subscribers residing on the premises.

A subsequent article for the sale of the farm was placed in The New-York Journal, & Patriotic Register newspaper[5].  It reads:

"ON Staten-Island, pleasantly situated within one mile of the village of Richmond, one late the property of Jonathan Lewis, deceased, the other of John Laforge, deceased; the two containing two hundred and twenty-five acres of land and salt meadow; one being bounded, in front, by the Fresh Kill Creek and the main road from New-York ferry to the Old Blazing Star; the other bound, in front, by the main road from New-York ferry to Perth Amboy, and joining in rear; there are on the said farms two good dwelling houses, almost new, two good barns, and out houses of every kind, with a sufficient proportion of fresh meadow and wood, with post and rail timber of the best kind; likewise, an excellent stream and situation for a grist mill, with a landing place, navigable for vessels of fifty tons burthen.  The said farms are in good repair.  Any persons inclining to purchase, may know the terms, by applying to the subscribers, on the premises.

It may be that Marie (LaTourette) Lewis died before 31 December 1791 and the executors are selling the rest of the property as directed by Jonathan Lewis.

It is not known if the land was successfully sold or if the family remained on the properties.

There are no apparent burial records for Jonathan and Marie (Latourette) Lewis in Richmond County, New York.
5.  SOURCES