It's Treasure Chest Thursday - a chance to look in my digital image files to see what treasures I can find for my family history and genealogy musings.

The treasure today is the 1890 Naturalization record for my great-grandfather, Thomas Richmond (1848-1917) of Putnam, Connecticut. 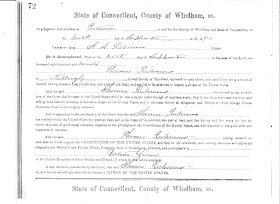 The transcription of the naturalization record is (handwritten entries in italics):

Be it Remembered, That on the   tenth   day of   September    in the year of our Lord, one
thousand eight hundred and   ninety

Thomas Richmond
of   Killingly   , in said County of Windham, appeared in open Court, (the said Court being a Court of
Record, having common law jurisdiction, and a Clerk and Seal,) and applied to be admitted to become a citizen of the United States.

And the said    Thomas Richmond    then proved to the satis-
faction of the Court that he came to the United States while he was a minor under the age of eighteen years; that it was then, ever since has been, and
still is, bona fide his intention to become a citizen of the United States, and to renounce forever all allegiance and fidelity to every foreign Prince,
Potentate, State or sovereignty whatever.

And it appearing to the satisfaction of the Court that the said   Thomas Richmond
has resided within the United States five years at least, and in the State of Connecticut one year at least, and that during said five years he has be-
haved as a man of good moral character, attached to the principles of the Constitution of the United States, and well disposed to the good order and
happiness of the same.

And the said    Thomas    Richmond    , having declared on
oath that he would support the CONSTITUTION OF THE UNITED STATES, and that he did absolutely and entirely renounce and abjure all
allegiance and fidelity to any Foreign Prince, Potentate, State of sovereignty, whatever, and particularly to
Victoria Queen
of the United Kingdom of Great Britain and Ireland, of whom he was before a subject.

It was, therefore, considered by the Court, that said    Thomas Richmond
be, and he was accordingly admitted to become a CITIZEN OF THE UNITED STATES.