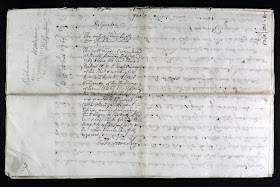 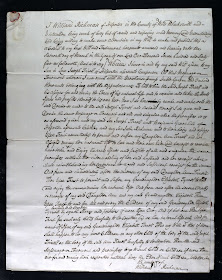 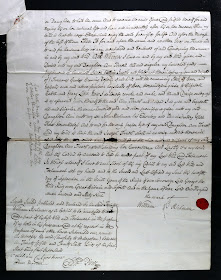 This will and codicil were prob^a
at North Bradley Oct 25^th
1769 before the Rev^d Edward
Batten ?th M.A. ?????? Surrogate
of the Rev^d & worshipful
W^m. Whitworth ??? M.A.
Archdeacon of the Archdeaconry
of Sarum And by him A?tion of
the ????? of the Testator
was granted to Elizabeth
Cottle & Mary Little joint
E?trixes named therein being
first Sworn to the truth of y^e
will & codicil to perform the
same t& to exhibit an Inv^ry &
Acc^t when thereto Lawfully
required.
Tho: Frome Reg^r

The transcription of the codicil is:[page 1 of codicil, image 2 of 6]

I William Richman of Hilperton in the County of Wilts Blacksmith and
Victualler being weak of body but of sound and disposing mind Memory and Understanding
and being willing to make some alteration in my Will do make and publish this as
a Codicil to my last Will and Testament hereunto annexed and bearing date the
Sixcteenth day of March in the Year of our Lord One Thousand Seven hundred and Sixty
five as followeth (that is to say)  Whereas I have in and by my said Will given to my
Son in Law Joseph Tirrell of Hilperton aforesaid Carpenter All that Messuage or
Tenement wherein I now dwell with the Brewhouse pump Stable Garden and Orchard
thereunto belonging with the Appurtenances To hold to him the said Joseph Tirrell and
his assigns for and during the Term of his natural life and to receive and take the Rents
Issues and profitts thereof to his own Use, Now I do hereby revoke and make void the
said Devise so made to the said Joseph Tyrrol and instead thereof I do give and
Devise the same Messuage or Tenement and all and singular other the premises so as
as aforesaid given unto my said Son Joseph Tirrell unto Benjamin Greenhill of
Hilperton aforesaid Clothier and my Son John Richman and to their heirs and assigns
Upon Trust nevertheless to permit and suffer my Daughter Ann Tirrell and her
Assigns during her natural life to her and their own Use and benefit to receive
have take and Enjoy the rents Issues and profitts of all and singular the same
premises without the intermeddling of her said husband and her receipt alone
shall notwithstanding her coverture be a good and sufficient receipt for the same.
And from and immediately after the decease of my said Daughter Ann Tirrell
Then Upon Trust to permit and suffer my Grandaughter Elizabeth Tyrrol to hold
and enjoy the same during her natural life And from and after the several deaths
or deceases of my said Daughter Ann and my said Grandaughter Elizabeth Then
Upon Trust to and for All and every the Children of my said Grandaughter Elizabeth
Tyrrell ^lawfully to be begotten^ by equal shares and portions if more than One, And if but one Then Upon
Trust for such only Child lawfully to be begotten ^for^ his or her natural life only And for
want of Issue of my said Grandaughter Elizabeth Tirrell Then my Will is that if there
shall happen to be any more Children or any other Child of the body of the said Joseph
Tirrell or the body of the said Ann Tirrell lawfully to be begotten Then the said
Messuage or Tenement and premises to go to such Child or Children if more than
one for and during their respective natural lives the Elder of such Children whether Son

or Daughter to hold the same And to receive then rents Issues and profitts thereof for and
during his or her natural life and from and immediately after his or her decease Then my
will is that the next Eldest shall enjoy the said premises for life And after the decease
of the last of them Then To for and upon the same and no other Uses or Trusts and
to and for the same Uses as are mentioned and declared of and Concerning the same
in and by my said Will And Whereas I have in and by my said Will given and
Devised unto my said Daughter Ann Tirrell All and singular my household goods
Implements of household Linnen bedding Jewels and plate (not therein before given and disposed
of) Furnaces Grates Brewing Vessells of all kinds with the remaining Stock of Beer and
Vessells over and above fourteen hogsheads of Beer therein before given to Elizabeth
Cottle and Mary Little,  Now I do hereby revoke and make void the said Devise or bequest
to as aforesaid made thereof to the said Ann Tirrell and instead I do give and bequeath
all and Singular the same household goods and other premises so given unto my said
Daughter Ann unto my son John Richman his Executors and Administrators Upon
Trust Nevertheless And to and for the only proper Use of my said Daughter Ann Tirrell
And my Will is that the said Joseph Tirrell shall in no while meddle therewith
that ???? the same shall belong ???? and be at the sole use and disposal of my said
Daughter Ann Tirrell notwithstanding her Coverture, and Lastly it is my Will
that this Codicil be annexed to and be made part of my Last Will and Testament.
In Witness whereof I have to each Sheet of this my Codicil to my said Last Will and
Testament set my hand and to the Second and Last Affixed my Seal this twelfth
day of September in the Ninth Year of the Reign of our sovereign Lord George the
third King over Great Britain and so forth And in the Year of our Lord One Thousand
seven hundred and Sixty Nine.                                      the mark of
William W Richman   {seal}
Signed Sealed Published and Declared by the said Testator  }
William Richman as a Codicil to be annexed to and             }
made part of his last Will and Testament n the presence       }
of us who in his presence and at his request in the                }
presence of each other have Subscribed our names              }
as Witnesses the words (lawfully to be begotten) between  }
the Twenty Fifth and Twenty Sixth Lines of the first             }
Sheet being first Interlined                                                   }
William Culverhous
Adam Martin                      ????? Pierce ???

The source citation for this probate record is:

The codicil to the 1765 will was written before William Richman died in 1769.  The major change was to remove John Tirrell, the husband of the daughter Ann, from having any bequest from the William Richman estate.  He is called meddlesome in the codicil.  So Ann Tirrell is bequeathed the messuage and tenement and the appurtenances, and it should be passed on to her daughter Elizabeth, and elizabeth's children, and any other children of Ann Tirrell.  In addition, the household goods that were bequeathed to Ann Tirrell in the will are now bequeathed to John Richman, son of William richman.
William Richman (1694-1769), blacksmith of Hilperton,  married Elizabeth Sartin (1700-1758) in 1720 in Hilperton, Wiltshire.  He and Elizabeth had six children, but two of them died before the will of William Richman was written.  The four surviving children are:
*  John Richman (1724-1807), married 1756 Mary Crabb (1724-1802), had sons John and William Richman.*  Elizabeth Richman (1728-????), married 1745 Joseph Cottle (1720-????), had children William and Mary Cottle.*  Ann Richman (1736-????), married John Tirrell (1733-????), had daughter Elizabeth Tirrell.*  Mary Richman (1736-????), married 1757 Abraham Little (1737-1794), had children Elizabeth, Mary and Phebe Little.

Finding this will again - I abstracted it in 1993 in the Trowbridge (Wiltshire) County Record Office but did not transcribe it at the time - helped me figure out who some of the John Richmans in Hilperton and surrounding parishes are in a process of elimination of who might be the parents of my John Richman born in 1789.

Unfortunately, the Hilperton parish registers (available on Ancestry.com) and Bishop's Transcripts (available on FamilySearch digital microfilm) are incomplete, and there are few other Hilperton records available.  The parish chest records would likely be invaluable but probably exist only in the St. Michael's and All Angels church records in Hilperton.  In 1993, the church warden, Mr. Potts, had them in his home in Hilperton.