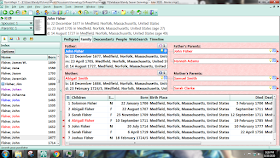 William S. Tilden edited the book History of the Town of Medfield, Massachusetts, 1650-1886, The family genealogy section of the book provides this summary for John Fisher[1]:

"John Fisher was a blacksmith like most of the family, and settled in the north part of the town near Castle Hill.  An old cellar on the farm of Geo. W. Bruce probably marks the spot.  A grant of twenty rods for building was made to the family in 1701 - evidently in this locality.  He was admitted to full communion in 1710.  He married in 1705 Abigail Smith, who died in 1725.  John died in 1727, a few months before his father.  The estate was settled in 1735."

John Fisher was born 22 December 1677 in Medfield, Massachusetts, the second child and first son of John and Hannah (Adams) Fisher[2].

John Fisher married Abigail Smith on 23 April 1705 in Medfield[3].  She was born 18 December 1686 in Medfield, the daughter of Samuel and Sarah (Clarke) Adams.   John and Abigail (Smith) Fisher had seven children, all born in Medfield and recorded in the town record book:

There is no burial record available for John Fisher, but he may have been buried in Vine Lake Cemetery in Medfield.

John Fisher's father, John Fisher (1652-1727), died intestate on 15 December 1727 in Medfield, only three months after John Fisher's (1677-1727) death.  His estate file shows that his son John's heirs received a double portion when it was closed in 1728, with administrator Joshua Fisher (son of the elder John) assigned all of the real estate and paying 46 pounds to the heirs of the younger John Fisher, and 23 pounds to the heirs of his three sisters.  When Hannah (Adams) Fisher died in 1746, her children or their heirs received £11-10s per share from their father's estate.

On 11 August 1735, the apprisers informed the court that the property "will conveniently make but one settlement according to the best judgment of the subscribers" and recommended that it be settled on the eldest son, John Fisher. The Court ordered the subscribers to apprise the real estate, which was done on 15 September 1735 and it totaled £384.  On 16th September 1735, the eldest son, John Fisher, Josiah Fisher and Samuel Smith posted a bond of £768, and the Court ordered that eldest son John Fisher would receive the real estate, and would pay his three living siblings (Abigail Plimpton, Sarah Fisher and Joshua Fisher) £76-16s each as their share of the estate.

1. William S Tilden and John A S Monks, History of the town of Medfield, Massachusetts, 1650-1886 : with genealogies of the families that held real estate or made any considerable stay in the town during the first two centuries (Boston, Mass.: G.H. Ellis, 1887), page 389, John Fisher family sketch.