This week's document for transcription is the 1763 Will of Rebekah (Potter) Kerby (1681-1773) of Dartmouth, Bristol County, Massachusetts, which is in the Bristol County Probate Court records. 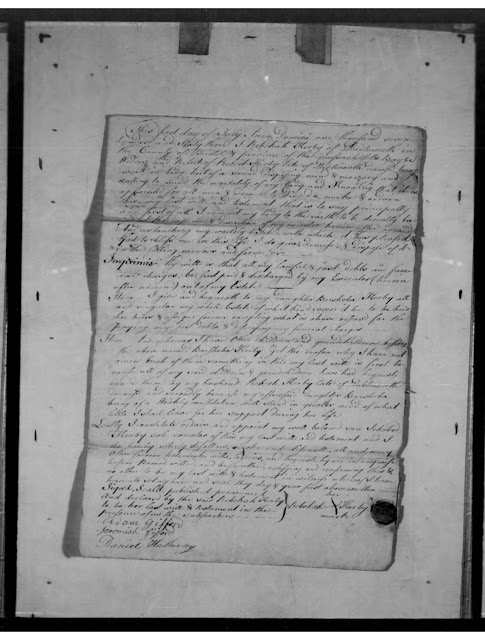 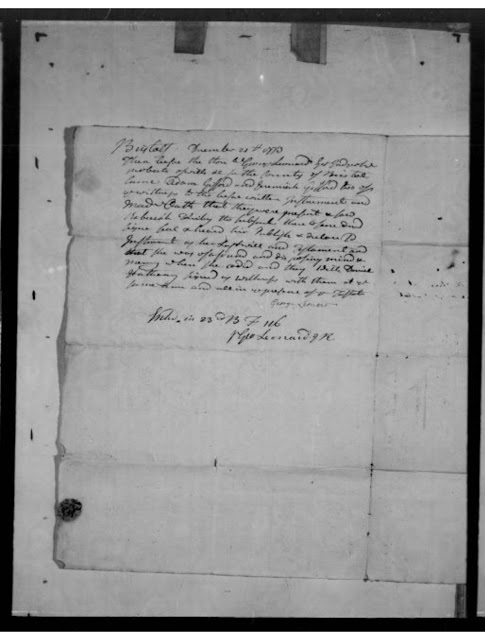 The transcription of this will is:
[image 3 of 13]
This first day of July Anno Domini one thousand seven
hundred and Sixty three I Rebekah Kerby of Dartmouth in
the County of Bristol & province of the Massachusetts Bay & a
Widow and Relict of Robert Kerby late of Dartmouth deceased being
weak in body but of a sound Disposing mind & memory and
calling to mind the mortality of my body and Knowing that it is
appointed for all men & women to die do make & ordain
this my last will and testament that is to say principally
and first of all I commit my body to the earth to be decently bu-
ried att the expense & discretion of my executor herein after named.
And as touching my worldly Estate with which it has pleased
God to bless me in this life I do give demise & dispose of it
in the folling manner and form viz.
Imprimis My will is that all my lawful & just debts and fune-
ral charges be first paid & discharged by my Executor (herein
after named) out of my Estate.
Item I give and bequeath to my daughter Barsheba Kerby all
and singular my whole Estate of what kind soever it be to be hers
her heirs & assigns forever excepting what is above reserv'd for the
paying my just debts & defraying my funeral charges.
Item And whereas I have Other children and grandchildren besides
the above named Barsheba Kerby yet the reason why I have not
given Each of them something in this my last will is first be-
cause all of my said children & grandchildren have had bequests
made them by my husband Robert Kerby late of Dartmouth
deceased and secondly because my afforesaid daughter Barsheba
being of a Weakly constitution will stand in greater need of what
little I shall leave for her support during her life.
Lastly I constitute ordain and appoint my well beloved son Ichabod
Kerby sole executor of this my last will and testament and I
do hereby utterly disallow, revoke and disanull, all and every
other former testaments, wills, legacies, and bequests by me in any wise
before named, willed and bequeathed, ratifying and confirming this &
no other to be my last will & testament in witness whereof I have
hereunto set my hand and seal the day & year first above written.
Signed, Sealed, published & pronounced }               her
and declared by the said Rebekah Kerby } Rebekah X Kerby
to be her last will & testament in the       }               mark
presence of us the subscribers                 }
Adam Gifford
Jeremiah Gifford
Daniel Hathway
[image 4 of 13]
Bristoll December 21'st 1773
Then before the Hon'bl George Leonard Judge of
probate of wills &c for the County of Bristol
Came Adam Gifford and Jeremiah Gifford two of
ye witnesses to the before written Instrument and
Made Oath that they were present & saw
Rebeccah Kirby the subject ????? ????? did
signe seal & heard her Publish & Declare sd
Instrument as her Last will and Testament and
that she was of a sound and disposing mind &
memory when she sodid and they with Daniel
Hathaway signed & wittnessed with them at the
same time and all in the presence of the Testator.
George Leonard
Ent'd in 23'rd 73 F 116
Geo. Leonard JR
The source citation for this probate case file is:
Bristol County, Massachusetts, Probate case files, Volume: Bristol 14000-15999 - Estate File #15226 (13 images),Rebekah Kirby estate, 1773; "Bristol County (Massachusetts) Probate Records, 1636-1899," digital images, New England Historic Genealogical Society, 2017, American Ancestors (https://www.americanancestors.org: accessed 19 December 2020); Digitized mages provided by FamilySearch.org from original records at Probate Registry, Taunton, Mass.
Rebecca Potter (1681-1773) married Robert Kirby (1674-1757) in about 1700 in Dartmouth, Massachusetts.  They had seven children:
*  Patience Kirby (1700-1740), married 1722 John Lawton (1692-1753).
*  Ichabod Kirby (1705-1793), married 1733 Rachel Allen (1708-1801).
*  Nathaniel Kirby (1708-1748), married 1731 Abigail Russell (1712-1785)
*  Barsheba Kirby (1710-????)
*  Recompence Kirby (1712-1771), married 1736 Rebecca Cornell (1718-????)
*  Silas Kirby (1714-1785), married 1742 Elizabeth Russell (1720-????)
*  Robert Kirby (1717-1802), married 1744 Abigail Allen (1726-????)
Rebecca (Potter) Kirby wrote her will on 1 July 1763, and died on 10 October 1773 in Dartmouth.  At the time of her death, only four of her children were alive.  Her will bequeathed the entire estate to her daughter Barsheba Kirby, who was of "... a weakly constitution."  Her son Ichabod Kirby was named executor of the estate.  However, on 17 October 1773, son Ichabod Kirby petitioned the probate court stating that he was not willing to serve for many reasons, and recommended his brother Richard Kirby.  Richard Kirby then petitioned the court requesting a letter of administration on the estate.  Richard and Robert Kirby posted a bond, and Richard was granted a letter of administration on 21 December 1773.  An inventory was taken of Rebekah Kirby's estate that totaled over 40 pounds of personal estate and submitted to the Court on 23 December 1773.
There is no probate record in Bristol County for Barsheba Kirby, and it is not known when she died.  If she was alive in 1773, she was probably living with one of her siblings who used the money for her lifelong support.
Robert and Rebekah (Potter) Kirby are my 7th great-grandparents, through their son Ichabod Kirby (1705-1793) who married Rachel allen (1708-1801) in 1733 in Dartmouth, Massachusetts.
=========================================
NOTE: Genea-blogger John Newmark (who writes the excellent TransylvanianDutch blog) started a Monday blog theme years ago called "Amanuensis Monday." John offers this definition for "amanuensis:"