Happy St. Patrick's Day - I Didn't Know I Was Irish Until My DNA Told Me

Am I Irish if my AncestryDNA test says that I am 7% Irish ancestry?  I guess I'm entitled to post this: 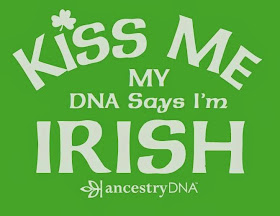 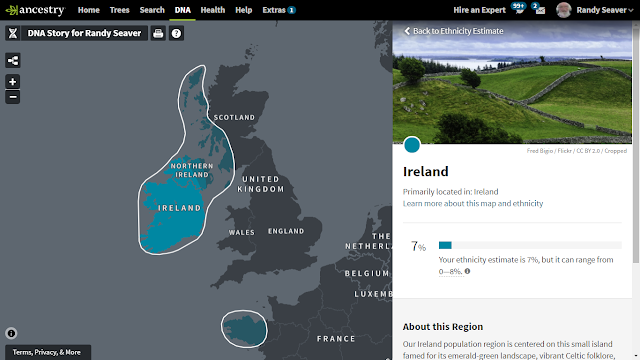 Some thoughts about my "Irish" ancestry:*  The matches they've made of my autosomal DNA with that of other "Irish" people show that I'm 7% "Irish."  however, the range could be 30% to 8%.  Of course, it was 18% three years ago, so I'm losing my Irishness every few years. *  This ethnicity estimate is based on a pool of 732 persons identified as having "Irish" ancestry.  *  I am nowhere near the percentage of the "typical native" of Ireland.  For all we know, those 732 could have significant English ancestry.*  From what I've heard, the autosomal DNA test indicates ethnicity as of about 2,000 years ago - around the time of the Roman invasion and rule of southern England, but not of Ireland.  The Celts in England were pushed westward to Ireland and Wales and Cornwall.  There were earlier migrations to the British Isles in prehistoric times from central Europe, Gaul and Iberia. *  My ethnicity according to my genealogy research is about 65% British Isles and about 35% Western Europe (mainly Germany, with a little Dutch, French and Scandinavian).  But that's based on where my ancestors lived about 500 years ago.  Of course, it's those Angles, Saxons, Danes, Normans, Vikings, etc. who muddied up the gene pool in England and Ireland. *  Over the last 400 years, I may have a few ancestors who lived in Ireland, but I doubt that I have 7% who were born there.  If the ethnicity estimate was 3% or even 5%, I'd tend to believe it.  It may be that some of those conquering heroes took Celtic wives and they contributed to my gene pool with a fair amount of Irish ancestry in the green end. For the record:*  I love Irish music.*  I love the spirit of the Irish people, both sides, Orange and Green.*  I've been to Northern Ireland once on business in 1985, and it was really green.*  We visited Dublin for a day on the Legacy Family Tree 2013 genealogy cruise, and we visited St. Patrick's cathedral.*  I don't like beer, and especially green beer.* I would love to experience Irish research...if I could only find the connection in my genealogy.  I do have some "dead ends" in my pedigree chart, and some of them may lead to Irish ancestry if I can find the intervening generations.  I have searched a bit for Seaver persons in Ireland records.I also posed for this picture in Dublin with a wee Irish lass (is this my cousin?) ... 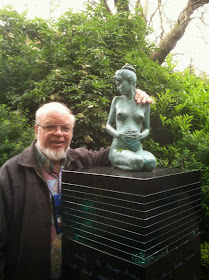