Carringers in the News -- Marion A. Carringer Dies in Tionesta, Pennsylvania in 1973

It's time for another edition of "Carringers in the News" - a weekly feature from the historical newspapers about persons with the surname Carringer (my mother's maiden surname) that are interesting, useful, mysterious, fun, macabre, or add information to my family tree database.

This week's entry is from the Warren [Penn.] Times-Mirror and Observer newspaper dated 12 June 1973: 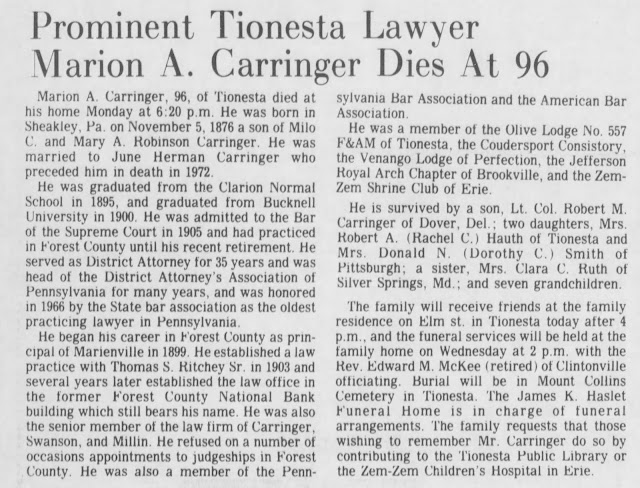 The transcription of this article is:
"Prominent Tionesta Lawyer Marion A. Carringer Dies At 96
"Marion A. Carringer, 96, of Tionesta died at his home Monday at 6:20 p.m.  He was born in Sheakley, Pa. on November 5, 1876 a son of Milo C. and Mary A. Robinson Carringer.  He was married to June Herman Carringer who preceded him in death in 1972.
"He was graduated from the Clarion Normal School in 1895, and graduated from Bucknell University in 1900.  He was admitted to the Bar of the Supreme Court in 1905 and had practiced in Forest County until his recent retirement.  Her served as District Attorney for 35 years and was head of the District Attorney's Association of Pennsylvania for many years, and was honored in 1966 by the State bar association as the oldest practicing lawyer in Pennsylvania.
"He began his career in Forest County as principal of Marienville in 1899.  He established a law practice with Thomas S. Ritchey Sr. in 1903 and several years later established the law office in the former Forest County National Bank building which still bears his name.  He was also the snior member of the law firm Carringer, Swanson, and Millin.  He refused on a number of occasions appointments to judgeships in Forest County.  He was also a member of the Pennsylvania Bar Association and the American Bar Association.
"He was a member of the Olive Lodge No. 557 F&AM of Tionesta, the Coudersport Consistory, the Venango Lodge of Perfection, the Jefferson Royal Arch Chapter of Brookville, and the Zem-Zem Shrine Club of Erie.
"He is survived by a son, Lt. Col. Robert M. Carringer of Dover, Del.; two daughters, Mrs. Robert A. (Rachel C.) Hauth of Tionesta and Mrs. Donald N. (Dorothy C.) Smith of Pittsburgh; a sister, Mrs. Clara C. Ruth of Silver Springs, Md.; and seven grandchildren.
"The family will receive friends at the family residence on Elm st. in Tionesta today after 4 p.m., and the funeral services will be held at the family home on Wednesday at 2 p.m. with the Rev. Edward M. McKee (retired) of Clintonville officiating.  Burial will be in Mount Collins Cemetery in Tionesta.  The James K. Haslet Funeral Home is in charge of funeral arrangements.  The family requests that those wishing to remember Mr. Carringer do so by contributing to the Tionesta Public Library or the Zem-Zem Children's Hospital in Erie."
The source citation is:
"Prominent Tionesta Lawyer Marion A. Carringer Dies At 96," Warren [Penn.] Times-Mirror and Observer newspaper, death notice, Tuesday, 12 June 1973, page 2, column 1, Marion A. Carringer obituary;  Newspapers.com   (https://www.newspapers.com : accessed 19 July 2021).
This obituary provides a birth date and place, parents' names, death date and place, spouse's name and death year, children's names, and information about his occupation, associations, and offices held.
Marion Aubrey Carringer was born 5 November 1876 in Sheakleyville, Mercer County, Pennsylvania, the son of Milo Cerastes and Mary Amanda (Robinson) Carringer.  He died 10 June 1973 in Tionesta, Forest County, Pennsylvania.  He married June Herman (1885-1972) on 910 December 1919 in Tionesta, Pennsylvania.  They had four children:
*  Rachel Montgomery Carringer (1921-2011), married (1) 1945 Doyle Glenn Moye (1918-1993); (2) 1952 Robert Andrew Hauth (1917-2009).
*  Robert Milo Carringer (1922-2009), married (1) 1948 Janet Beatrice Adams (1927-1995); (2) 1997 Katheryn Kiser (1923-2015).
*  Henry Herman Carringer (1924-1925)
*  Dorothy June Carringer (1924-2014), married 1952 Donald Manning Smith (1929-2010).
I am a second cousin two times removed to Marion Aubrey Carringer.  Our common ancestors are my 3rd great-grandparents Daniel and Elizabeth (King) Spangler and my 4th great-grandparents Martin Carringer (1758-1835) and Maria Magdalena Hoax (1768-1851).
There are hundreds of Carringer "stories" in my family tree - and this was one of them.   Life happens, accidentally and intentionally, and sometimes a person has a long career of public service and a wonderful obituary chock full of information.  I am glad that I can honor Marion Aubrey Carringer today.
You never know when a descendant or relative will find this blog post and learn something about their ancestors or relatives, or will provide more information about them to me.
=============================================
Disclosure:  I have a complimentary subscription to Newspapers.com and have used it extensively to find articles about my ancestral and one-name families.

The URL for this post is:  https://www.geneamusings.com/2021/07/carringers-in-news-marion-carringer.html
Copyright (c) 2021, Randall J. Seaver