I can't help it, I can't do a wordless post! This is one of my favorite photographs: 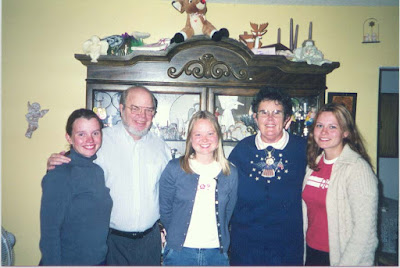 This picture is of the second visit of the Finnish Olympic Shopping Team to Chula Vista.  It was taken in our living room in November 2000.
These young ladies were professional shoppers and travelers, not to mention geologists!  They visited Chula Vista in late October 2000 on their way home from their graduate studies at a Washington state university.  The photo shows, from the left, Milla, Randy, Mia, Linda, and Ulla.  Mia was one of our exchange girls in the summer of 1994 and we have kept in touch with her since then.
Milla, Mia and Ulla attended the university in Oulu in Finland and spent the summer of 2000 in Washington state in a field study course that counted toward their degrees.  When they arrived in the USA for their summer classes, they bought a well-used station wagon because they knew they needed space to travel throughout the western USA with soil samples and rocks that they would use for their graduate program back in Finland.  They ended their studies in Washington in September, and then traveled through Washington, Oregon and California sightseeing and seeing friends.  They stopped at my daughter Lori's home in Santa Cruz, and made it to the Grapevine (I-5 in Los Angeles county) when the station wagon gave out.  Triple-A towed the station wagon to Tami's house, where they left it on the street near daughter Tami's house in Long Beach.  They unloaded the car and I think sold it to a junk dealer.  Several days later, Tami and James loaded their two cars, and met us in San Juan Capistrano for dinner, transferred everything to our two cars, and we drove them to our house.  The three girls settled into our three extra beds for about two weeks, and we had a wonderful time sightseeing (Zoo, Wild Animal Park, Sea World, La Jolla, Point Loma, Coronado, and more) and learning about their studies, lives and travel experiences.  They got to experience the tense election night in November 2000 with us and learned a bit about our election practices.  Since their car was kaput, they needed a ride to Dallas, insisting on going through Las Vegas, Grand Canyon, and Carlsbad Caverns, where they had plane tickets to fly home to Finland.  One of the girls had a brother in Dallas, so he and two other young men drove all night to San Diego, loaded up the girls and their stuff, and off they went.  They caught their plane and, I'm sure, had plenty of stories and laughs to share the rest of their lives.
We have seen Mia several times since - she was in Finland when we visited her and her parents in Tornio, and she has been in San Diego twice on business and we have met for dinner and sharing both times.  Having exchange students was one of the best things we ever did as a family.  Mia is married with two children now, and I see her on Facebook often.
=============================================
The URL for this post is: https://www.geneamusings.com/2021/08/finnish-olympic-shopping-team-visits.html
Copyright (c) 2021, Randall J. Seaver