Seavers in the News - Joseph Loren Seaver Dies in 1957 in Independence, Missouri

This week's entry is from The Kansas City [Mo.] Star newspaper dated 6 September 1957: 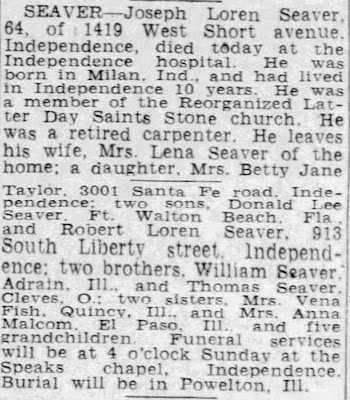 Disclosure:  I have a complimentary subscription to Newspapers.com and have used it extensively to find articles about my ancestral and one-name families.

The URL for this post is:  https://www.geneamusings.com/2021/10/seavers-in-news-joseph-loren-seaver.html
Copyright (c) 2021, Randall J. Seaver