1930 US Census on Ancestry.com

After writing about the drawbacks of the 1930 U.S. Census Indexing on Ancestry.com, I was happy to hear this at the Ancestry.com bloggers briefing at the 2009 FGS Conference:

"The 1930 U.S. census index has been updated to include street address, dwelling and family number, and father and mother's birthplace." [Note - my interpretation of what I heard - posted here].

That sounded like some progress, and I finally had a chance to check it out yesterday. I knew that the birthplace of children was not indexed previously, so I put my mother's name (Betty Carringer) into the Search Engine with her birth year and birthplace and saw ... no matches. Hmmm. Why is that? I quickly found the 1930 census record for the family in San Diego: 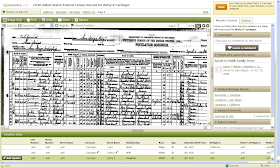 Yep. There they are at 2130 Fern Street in San Diego. The Index List at the bottom of the page shows Betty Carringer, birth year about 1920, but no birthplace is listed, nor are birthplaces for her parents. The only birthplace listed in the family is for the head-of-household, Betty's father, Lyle Carringer.
The entry in the Index List for the non-entered birthplaces says "Add," so I did. I clicked on the "Update" link for Betty, selected "Birthplace" and filled in the blank with "California:" 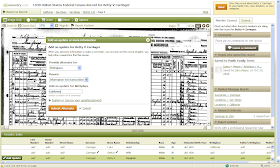 That worked. So I added birthplaces for everybody in the household, and the birthplaces of their parents too, based on the entries in the census record page. After all of that, my grandparents family now has the birthplaces entered for them. Here's what it looks like: 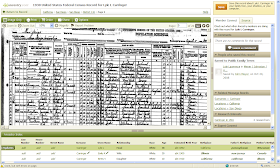 So I had to Do It Myself. I'm not going to do everyone's birthplace, though! Nope. But soon, when these updates are added to the Ancestry.com index for the 1930 US Census, I will be able to put my mother's name and birthplace into the Search field and find the census record without having to remember that it was not indexed originally by Ancestry.com.
So - did I misunderstand the Ancestry.com people at the FGS Conference? Apparently - they must have said:
"The 1930 U.S. census index has been updated to permit users to include street address, dwelling and family number, and father and mother's birthplace."
Ancestry.com said some time ago that they would spend some funds and time to correct poor indexes - I hope they improve the 1930 U.S. census, especially by adding the birthplaces, and the birthplaces of the parents, of all persons. That would bring the 1930 Census index up to the standards set by the 1900, 1910 and 1920 census records on Ancestry.com and the 1930 Census index on footnote.com.
Full disclosure: I am still not an employee, contractor or affiliate of Ancestry.com. I have paid for a US Deluxe subscription to Ancestry.com. The comments and opinions above are my own.
Randy Seaver at 9:59 AM
Share